Rajasthan Royals face defeat after posting just 126 for 8 in their do-or-die match against Deccan Chargers.

Rajasthan Royals are on the brink of getting eliminated in IPL 5 after posting a low total of 126/8 in their do or die match against hosts Deccan Chargers at the Rajiv Gandhi International Stadium in Hyderabad.

Batting first after winning the toss, the Rajasthan Royals were off to a subdued start as the in-form Ajinkya Rahane nicked a pacy Dale Steyn delivery to slip in the 2nd over. Shane Watson (13 from 13 balls) tried to bring in some momentum before he was castled by a beauty from Amit Mishra which drifted in towards middle and spun away sharply to hit the off stump to make it 41 for 2 in 6.1 overs. 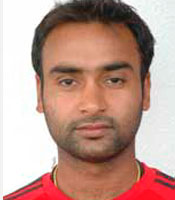 Mishra kept on bowling beautifully and picked up another wicket which came through a googly. In the 12th over, Rajasthan Royals lost the well set Skipper Rahul Dravid (39 from 36 balls with 5 fours) to find themselves struggling at 73 for 4 in 12 overs. Although the big hitting Owais Shah batted out till the last ball of the innings, Rajasthan Royals could just reach 126 for 8.

Owais Shah consumed 32 balls but could only score 28 with a lone boundary. The bowling was top class from Dale Steyn who came up with 2 for 16 in 4 overs while Amit Mishra with 2 for 20 in 4 overs spoilt the party for the Rajasthan Royals.