Having been outsmarted by Pakistan in the opening Test at Lord’s, England would have been raring to set the record straight in the second Test

Having been outsmarted by Pakistan in the opening Test at Lord’s, England would have been raring to set the record straight in the second Test. Old Trafford is a venue where they have hardly tasted a failure over the last decade-and-a-half. So, for a start, they were playing at the right ground. Further, England were aided by the fact that they batted first, and got the best use of batting conditions. Fluent hundreds from the experienced duo of Alastair Cook and Joe Root then ensured that England had the better of the exchanges as the hosts finished on an impressive 314 for 4.

On a pitch that wasn’t as quick as expected, but was doing enough to come on to the bat, the Root-Cook duo had it rather easy. They joined hands following Alex Hales’ dismissal at 25 for 1 in the sixth over, and were only separated having added 185 for the second wicket, in the 56th over of the day. The numbers make it clear that it was a day of complete toil for Pakistan. Mohammad Amir and Rahat Ali managed two wickets each, but worryingly, Wahab Riaz was again wicketless while Yasir Shah proved ineffective on a first day Manchester surface. 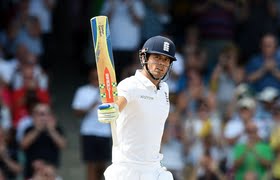 While conditions were in their favour, England still needed to ensure that they took advantage of the same. Cook and Root did the needful. For the England captain, this was an innings very unlike him. Over the years, we have seen the left-hander push and prod his way through big knocks, but on Friday at Old Trafford, he was in languid form, succeeding in finding the gaps as many as 15 times during his stay at the crease, and scoring at a rather quick strike rate of 61. En route to his hundred, he also equalled the record of Sir Don Bradman.

Cook looked set for a big haul, but Mohammad Amir, still feeling his way back into Test cricket, provided Pakistan with the much needed breakthrough, getting one through the southpaw’s defence. While Cook fell for 105, Root went on to his hundred, and carried on. He had to make up for Lord’s after all. All batsmen are allowed rare failures now and then, but the great ones know how to make it up. And Root, who played two over-ambitious strokes to give his wicket away in the previous Test, stayed till the end, 141 unbeaten.

Even as Root and Cook starred, the woes for the other English batsmen continued. Alex Hales was cleaned through the gate by Amir, after a couple of streaky fours. He hasn’t looked like the assured Hales of the series against Sri Lanka. James Vince’s horror run in Tests continued as he gave a simple catch behind the wickets to Rahat Ali. Ali provided further relief for Pakistan, and pain for Gary Ballance, as the nervous batsman chopped one on to the stumps. Thanks to Root and Cook though, England still hold the upper hand.