Having been slammed 1-4 in the one-dayers, India will go into the T20s hoping for better luck, and more competent performances. Although they were thrashed in a majority of the games, India did manage to clinch

Having been slammed 1-4 in the one-dayers, India will go into the T20s hoping for better luck, and more competent performances. Although they were thrashed in a majority of the games, India did manage to clinch a victory in the final ODI at Sydney, by chasing down a target of 331 successfully. As such, they would like to believe that they would have some momentum going into the Adelaide T20. But, Australia would refuse to entertain any such thoughts. They have held an edge over the Indians across formats for a while now, and would be keen not to let the advantage slip so easily. 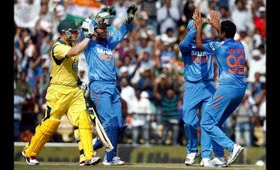 India's middle-order struggled in the ODIs owing to the obvious lack of experience. But, they have no such issues in T20s, at least not on paper. The format will see the return of Suresh Raina, one of the world's most destructive and successful batsman in T20s. Considering that he was dropped from the ODIs, the experienced southpaw will have a point to prove. The T20s will also mark the return to international cricket of veteran batsman Yuvraj Singh, following a fantastic domestic run. With Rohit Sharma, Shikhar Dhawan and Virat Kohli in great form, India's batting looks in great shape.
In the bowling department as well, India is likely to gain due to the valuable experience of Harbhajan Singh and Ashish Nehra. Harbhajan's Test and ODI days may be over, but thanks to his success in the IPL, he remains a force in the shortest format of the game. Also, Australia often brings out the feisty best in Harbhajan. Nehra's selection has been out of the blue, but with the other bowlers struggling, the selectors would be keenly eyeing whether he can be chosen for the World T20. In that sense, his selection is a significant one. Also, India would be pleased with Jasprit Bumrah's impressive debut, and should give him another go in T20s.
Like India, Australia too will be falling back on experience, clearly putting to rest the theory that T20 is a young man's game. More than four years after he retired from international cricket, Shaun Tait has been pulled out of wilderness. The return of Tait, at his peak, regarded among the fastest bowlers in the world, indicates that the Aussie selectors are not happy with the current crop of fast bowlers, at least when it comes to T20s. And so, like Nehra, he could be on the flight for the World T20, in case he performs well. The series is also an opportunity for Shane Watson to prove that he is not a spent force.
Australia will be weakened to an extent in the batting with the hard-hitting Glenn Maxwell being ruled out of the first match. But, in David Warner, Aaron Finch and Steven Smith, they have ample firepower to trouble the Indian bowlers. In the bowling, Australia are likely to hand out a debut to experienced off-spinner Nathan Lyon. Considering that he was played in the ODIs as well, it seems Australia are now ready to blood him in the shorter formats more frequently. Irrespective of the format, Australia will continue holding an edge over India as the T20s kick off at Adelaide.
-- By A Cricket Analyst