While India have already clinched an unassailable 2-0 lead heading into the last Test at Port of Spain, Trinidad beginning on Thursday, they still have a lot to play for in the final match, nothing more significant than the number one ranking.

While India have already clinched an unassailable 2-0 lead heading into the last Test at Port of Spain, Trinidad beginning on Thursday, they still have a lot to play for in the final match, nothing more significant than the number one ranking. A win in the fourth and final Test against the West Indies would see India topple Australia as the number one team in the world. The last time India had touched those heights was under MS Dhoni in 2011. But, the euphoria did not last long, as they lost the spot owing to constant defeats away from home. India will not only be keen to get the ranking back, but would also want to stay perched there for a while.

There are a couple of aspects India will be closely considering as they head into the final Test. The opening spot will definitely be a matter of debate. India preferred to go in with Lokesh Rahul and Shikhar Dhawan in the previous Test despite Murali Vijay being declared fit. And while Rahul has earned his spot, Dhawan hasn't been fruitful after an encouraging start. It remains to be seen whether India stay with the inconsistent but dangerous Dhawan or go in with the more reliable Vijay in the final Test. Opening is a hugely important position in the five-day game so India must quickly settle in on a combination.

In the middle order, Virat Kohli has shown a growing tendency of preferring the aggression of Rohit Sharma over the defence of Cheteshwar Pujara. The problem for the Indian skipper is that neither move is working. While Pujara failed to deliver in the first two matches, Rohit let the team down in the last game. The Indian team will be in a quandary over what to do with the team selection although having observed Kohli's team selections, there is every chance of him going for Rohit over Pujara, especially with the series decided. Having said that, India need to quickly settle in on one, especially when they play only five batsmen, because unpredictability will hurt them against bigger sides.

There was plenty to cheer about for India in the St Lucia Test. Bhuvneshwar Kumar, on comeback to the Test side after a brief gap, starred with a five-wicket spell that turned the complexion of the game. He will be elated with the effort since he had lost his way in recent times. Hundreds to Ravichandran Ashwin and Wriddhiman Saha were other big plusses. The knocks came at a time when India were in desperate need of them, having lost half their side with not a lot on the board. While Ashwin has constantly done well with the bat, especially against West Indies, a maiden Test ton was something Saha must have been desperately looking forward to to establish his place in the team. 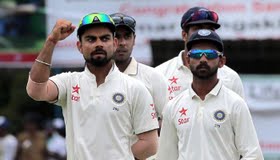 The continued success of middle-order bat Ajinkya Rahane will further please the Indians. He got a hundred in the second Test and a fifty in the third, which means his consistency on away tours remain in tact. In a strange turn of events, it will be Kohli's form that would bother India to an extent. After beginning the series with a tremendous double hundred, Kohli has not looked the part, struggling with the line outside the off-stump. He will want to change that. Also, India would consider a toss up between Amit Mishra and Ravindra Jadeja for the second spinner's slot since neither has been exceptional.