Sri Lankan opener Dimuth Karunaratne and Dinesh Chandimal featured in an unbeaten 149-run partnership for the third wicket as Sri Lanka dominated day one of the first Test against West Indies played at Galle.

Sri Lankan opener Dimuth Karunaratne and Dinesh Chandimal featured in an unbeaten 149-run partnership for the third wicket as Sri Lanka dominated day one of the first Test against West Indies played at Galle. On a day of attritional cricket, Karunaratne held things together for the hosts after they won they toss and decided to bat first, finishing exactly at 250 for 2. The openers, Karunaratne and Kaushal Silva featured in a steady half-century partnership that gave Lanka the early advantage. Karunaratne batted with poise right through the day to remain unbeaten on 135, and while Chandimal was luckier during his stay at the crease, his 72 was crucial in the context of the day. 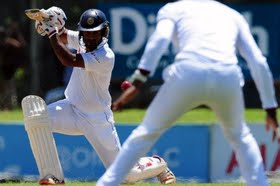 Karunaratne was on 82 at lunch, and Sri Lanka went into the break at 141 for 2. The slow nature of the surface and the cautious approach by the Sri Lankan batsman resulted in a far from attractive day as far as batting is concerned. But there was no shortage of action as far as West Indies were concerned. But, a lot of it had a negative impact on their performance. The visitors were erratic in the field as usual. They dropped a couple of catches, and were lucky as Lahiru Thirimanne, one of the beneficiaries did not carry on. But, Chadimal, whose mistimed pull off Devendra Bishoo could not be held made they pay, going past a half-century.

Jerome Taylor and Kemar Roach began well for West Indies, with their short but probing spells, asking questions of both the openers. Kaushal Silva in particular had a tough time, and even edged one, but was lucky to survive as the ball fell short of the fielder at gully. Karunaratne drove and left well. The standout feature of his innings was that he played with soft hands and glided the ball nicely into the gaps. In the company of Karunaratne, Silva also grew in confidence. He adopted his own method, playing inside the line to the pacers. The partnership crossed fifty and was looking good when Silva edged Roach to give Windies the big breakthrough.

Thirimanne' stay at the crease may not have been a brief one, but there was no doubt about the fact that he struggled for any kind of rhythm. Immediately after lunch, he shouldered arms to an incoming ball from new Windies skipper Jason Holder and was lucky that the ball did not take his off-stump. Not long after, he drove a good length delivery from Taylor to slips. But, Darren Bravo could not hold on to what wasn't a tough chance. But, if Thirimanne thought this was going to be his day, that wasn't the case. He found the going slightly easier against Bishoo and seemed to be settling in. Thirimanne, however, fell trying to hit the spinner out of the attack, and only managed to give a catch to short midwicket.

West Indies found an opening, but Karunaratne and Chandimal shut the door on them, at least for the day. While the opener was more sedate against the pace bowlers, he batted freely against Bishoo, using his feet nicely. Chandimal too found the going easy. It was the kind of day Angelo Mathews would have hoped for after winning the toss, and decide to bat first at Galle. Sri Lanka earlier handed a debut to Milinda Siriwardana, who scored a century in the practice game. Speaking of debutants, Holder in the first day as Test leader did not do badly. His rotation of pace bowlers was impressive. But, Lanka were way better on the day.