Rohit Sharma’s opportunity to impress as an opener prior to the Test series against South Africa was short-lived as he fell for a second-ball duck. Rohit was dismissed

Rohit Sharma’s opportunity to impress as an opener prior to the Test series against South Africa was short-lived as he fell for a second-ball duck. Rohit was dismissed by Vernon Philander, who got one to move slightly away and the Indian batsman only managed to edge it to the substitute keeper Heirich Klaasen, who kept wickets instead of Quinton de Kock.

Rohit is tipped to open the innings in the Test series against South Africa, and he is expected to be given a decent run to prove his worth, which means the duck on Saturday would not count for a lot. Of course, a few runs under the belt would have helped his cause as he looks to cement his place at the top of the order.

The opportunity for Rohit has risen as KL Rahul failed to seal his spot at the top of the order and before him, Shikhar Dhawan also struggled in that position. Rohit has featured in 27 Tests and has managed only three centuries at an average of under 40. 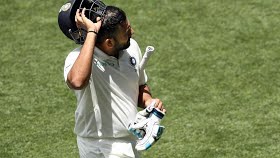 Coming back to the game, while Rohit failed Priyank Panchal scored 66 off 77 balls and wicketkeeper-batsman Kona Bharat hit an impressive 71 from 57 balls. Siddhesh Lad also hit a half-century as Board President’s XI ended on 265 for 8.

Apart from Rohit and Panchal, the fixed Test opener Mayank Agarwal made 39. Abhimanyu Easwaran, also auditioning for the opening slot, was out for 13 sent back by Kagiso Rabada, caught by Markram.

Earlier, South Africa declared their first innings at 279 for 6. Temba Bavuma shone with an unbeaten 87 while Philander added a quick 48 from 49 balls. This was after opener Aiden Markram had hit an impressive hundred the previous day. For BP XI, Dharmendrasinh Jadeja was the most successful bowler with 3 for 66.

After India lost Rohit and Easwaran early, Agarwal and Panchal featured in a third-wicket stand of 52 for the third wicket. Agarwal lost his wicket trying to take on Keshav Maharaj, who finished with 3 for 35.

Panchal hit 10 fours and a six in a half-century and was eventually dismissed Philander (2 for 27), caught by Faf du Plessis. Bharat and Lad had some fun out in the middle, adding 100 in 20 overs for the sixth wicket.