Jasprit Bumrah: I have a lot to learn from the senior bowlers

Team India is in South Africa for a Test series, and Jasprit Bumrah is with the Test squad for the first time. In a video that uploaded on Twitter

Team India is in South Africa for a Test series, and Jasprit Bumrah is with the Test squad for the first time. In a video that uploaded on Twitter by the Board of Control for Cricket in India (BCCI), Bumrah spoke about his journey from white ball to the red ball, and also about India’s first practice session. 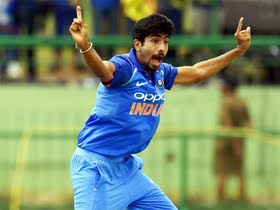 On his first time with the Test team, the bowler said, "For me as well, it was a good session as it is my first trip to South Africa with the Test team. I have been with the team in the ODI set-up but being a part of the Test team is a good feeling. I have a lot to learn from the senior bowlers and the bowling coach as well.

"It was a good long productive bowling session for all the bowlers. Since there was a little bit of juice in the wicket, our wicket-keeper too was feeling a little bit of pace which are bowlers were generating," Bumrah went on to add.

The first Test match begins at Cape Town on January 5.