AT Rayudu has earned his maiden call in the Indian team after he was named as the replacement for the injured Manoj Tiwary. This is a second setback for the stylish Tiwary who suffered from a wrist injury last season.

AT Rayudu has earned his maiden call in the Indian team after he was named as the replacement for the injured Manoj Tiwary. This is a second setback for the stylish Tiwary who suffered from a wrist injury last season. Manoj Tiwary who is also the Bengal Captain was feared to have a muscle tear in his back which forced him to retire hurt after scoring a half century during the Ranji match against Saurashtra. Tiwary did not bat in Bengal’s second innings and his injury has been diagnoses as a side strain and is expected to be out of action for atleast six weeks.

It is a tragedy of sorts for Manoj Tiwary as he has got runs and taken wickets in the limited opportunities he got with the Indian Team. Inspite of a fabulous century against West Indies when Team Indian was in trouble, Tiwary couldn’t cement his place in the XI and was often left on the benches. Now that the other young guns are failing in the Tests, Tiwary was in the front run to get a go but this injury has spoilt his chances for now. 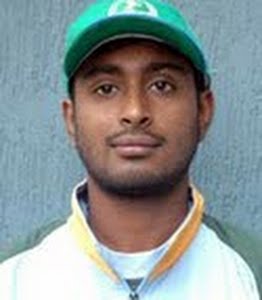 Tiwary’s replacement in the T20I Squad - the 27-year-old Ambati Rayudu was highly rated as the next Sachin Tendulkar during his teenage days in Hyderabad. Rayudu went onto lead India Under 19 and just when everyone thought he was going to be the next big thing in Indian batting, his place in the Hyderabad Ranji team itself was gone following problems with his teammates, in particular with Arjun Yadav and his father – former Test Cricketer Shivlal Yadav along with the then Coach Rajesh Yadav. Rayudu had shifted to Andhra to revive his first-class career. In 2007, Rayudu had almost ended his career from official cricket by taking part in the rebel Indian Cricket League. Following the BCCI amnesty, Rayudu came back into Indian Domestic Cricket playing for Baroda. In the IPL, he has got a second life in his career by playing a few exciting knocks for the Mumbai Indians while doubling up as a makeshift wicket keeper.