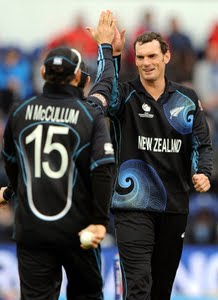 Pitch report :The Pallekele pitch has tended to provide assistance to seam bowling under lights, though on occasion it has also been a happy venue for spinners. If rain is in the air, teams may choose to bowl first, reasoning that it is more difficult to defend a total with a wet ball.It should perhaps go without saying at this stage in the tour, but once again, rain shapes to be the defining influence of the match. The past two days in Pallekele have been hot and humid, before rain has arrived after dusk, around the time the match is scheduled to begin. Tuesday's forecast is for more of the same.

But if the weather relents long enough to allow a result, both teams have concrete goals for the series. Sri Lanka's first task will be to protect their No. 1 ranking, having maintained it for over a year now. Their longevity atop the points table is perhaps as much a reflection of the infrequency of Twenty20 cricket as Sri Lanka's affinity for it, but it has been a point of pride for the side in a lean year of cricket. They need one win in the two matches to keep their top ranking, unless both matches are washed out.
New Zealand have four Twenty20s scheduled before the World T20 in Bangladesh, which begins this March and this series will be another exercise in building depth. James Neesham and Neil Broom had had match-winning turns for Otago in the Champions League, and if picked, both men will hope to replicate their results on turning pitches, and secure a place in the side bound for the World T20. In Brendon McCullum and Ross Taylor's absence, men like Luke Ronchi and Colin Munro have the opportunity to capture the attention of the selectors.
The hosts, however, will seek to finalise their combination for the World T20. They had rotated the seniors to free up a space for a young player in their last T20 series, but captain Dinesh Chandimal has suggested his team will play its best XI this time.
Doubts about Dinesh Chandimal's aptitude for T20 have been voiced since he was appointed Sri Lanka's captain in the format in February, and though Sri Lanka have only played four T20s since, his ODI form does not suggest fluency in limited-overs cricket. As the team now embarks on the home stretch to the World T20, he must prove to himself, and his team, that he deserves a place in the side he leads.
Nathan McCullum's cricket has gathered steam over the back end of New Zealand's trip to the subcontinent. In Hambantota, he walloped 32 off 9 balls to effect an unlikely win, and in Dambulla, he removed Mahela Jayawardene and Kumar Sangakkara within three balls, and had sparked worry in the opposition, when he blasted another 35 not out with the bat. After that match, Kyle Mills had spoken of the team's confidence in him to finish matches, and Sri Lanka will be aware that even if New Zealand's top order goes cheaply, an in-form match-winner lurks lower down.
Ball by ball updates
Full Scorecard
Last Five Match Result :
Sri Lanka: WLLWW (last five completed matches, most recent first)
New Zealand: WWLWL
Match Stats :As an opener, Mahela Jayawardene averages 42.57 and has a strike rate of 138.52. Like in ODIs, these figures are substantially better than his returns lower down the order.
In five matches in Pallekele, New Zealand have been involved in two ties. Both times, during last year's World T20, they lost in the Super Over.
Teams:
Sri Lanka team: KC Sangakkara(wk), DPMD Jayawardene, TM Dilshan, KMDN Kulasekara, SL Malinga, BAW Mendis, AD Mathews, RAS Lakmal, NLTC Perera, HDRL Thirimanne, LD Chandimal(c), MDKJ Perera, Sachithra Senanayake, Seekkuge Prasanna, RLB Rambukwella
New Zealand team: KD Mills(c), L Ronchi(wk), GD Elliott, NT Broom, NL McCullum, IG Butler, HD Rutherford,RJ Nicol, MJ McClenaghan, AF Milne, Colin Munro, Tom Latham, Andrew Ellis, Corey Anderson, James Neesham, Anton Devcich