Skipper Adam Gilchrist playing after a long time following a hamstring injury straightaway came up with a match winning knock of 64 not out to keep Kings XI Punjab alive and kicking in the IPL 5.

Needing 121 to win on a seaming track, Gilchrist led from the front using all his experience to score an unbeaten 64 from 46 balls with 9 fours and 2 sixes. Kings XI Punjab went onto defeat defending champions Chennai Super Kings by 6 wickets with 21 balls to spare which now takes them to 16 points with another game to go. 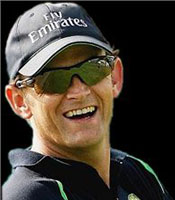 The Kings XI Punjab is currently placed at no.5 while CSK having played out all its 16 games has finished with 17 points and is at no.4. The future of CSK will depend on whether the teams below it win or not in the remaining games.

It wasn’t going to be an easy target to chase as the track had everything to help the seamers. However, a 51-run stand in 6.5 overs between Gilchrist and Mandeep Singh (24 from 21 balls) did more than half of the job for the homeside. For the CSK, Ben Hilfenhaus with 4-0-20-1 and Dwayne Bravo with 3-0-18-2 did their best but couldn’t deliver the victory for the visitors.