RCB posted 171/6 Vs Mumbai Indians in the 62nd match of IPL 5 at M Chinnaswamy Stadium thanks to Mayank Agarwal's 64 not out from 30 balls.

Mayank Agarwal, who is just 21 years of age, came up with probably the best knock of his life to lift hosts Royal Challengers Bangalore to a handsome total of 171/6. The Karnataka lad struck the ball sweetly to score an unbeaten 64 from 30 balls with 6 fours and 4 sixes to have RCB in the driver’s seat against Mumbai Indians in the 62nd match of the IPL 5.

Things weren’t going nicely for RCB after they were put into bat first by Harbhajan Singh. Chris Gayle and Virat Kohli departed early to have them at 11 for 2 in 2.4 overs. Just when the pressure was very much on RCB, Munaf Patel came up with a shocking over that leaked 21 runs which included three noballs and a wide. 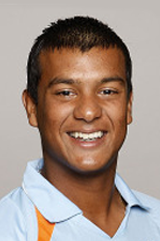 RCB appeared to be getting on track for a solid total but again stuttered at 87 for 5 in 11.3 overs when AB de Villiers got caught driving Kieron Pollard to mid off. All this while, the RCB were being anchored by opener Tillakaratne Dilshan who scratched around facing 50 balls for his 47 which had 4 fours and a six.

The homeside were about to settle for a modest total before Munaf Patel returned to bowl a pathetic last over which was taken for as many as 24 runs! Mayank Agarwal took the Indian pacer to the cleaners with two sixes and two fours in the final over. Munaf had a poor evening going for 54 runs in his 4 overs besides his shoddy performance on the field.