Having been taken down by an inspired Pakistan in the opening Test at Lord's, England will be desperate for revenge when the teams meet in the second Test at Old Trafford, Manchester starting Friday

Having been taken down by an inspired Pakistan in the opening Test at Lord's, England will be desperate for revenge when the teams meet in the second Test at Old Trafford, Manchester starting Friday. England find themselves in a somewhat unfamiliar position as they have rarely conceded a series lead at home in recent years. The defeat to India in 2014 was a rare occurrence, but England bounced back superbly from that reversal to clinch the series. While England will be keen to come back from a Test down, Pakistan will want to build on the unexpected lead they have gained early in the series.

In their endeavour to square the series, England have named a 14-man squad, which includes the comeback men in James Anderson and Ben Stokes and also leg spinner Adil Rashid, who has been recalled in place of the uncapped Toby Roland-Jones, who was part of the Lord's squad. It would be interesting to see what kind of tactics England adopt for the second Test. The comeback of Anderson and Stokes will definitely strengthen their chances both in the bowling as well as the all-round department. Both players will be keen to make an impact. While Anderson will be seeking another match-winning effort, Stokes is still looking at ways to overcome the WT20 final debacle.

England's batting will undoubtedly be under the scanner at Old Trafford. Apart from Alastair Cook in the first innings, no one made a big score, so that is one area where they need to show serious improvements. Joe Root had a rare failure in the last Test, and he would be desperately looking forward to make amends. When Root gets a big one, England's fortunes improve drastically. But, the middle order must also fire. James Vince admittedly will be under pressure to keep his place in the team. Gary Ballance, who made a comeback at Lord's, also will have a point to prove. Alex Hales and Jonny Bairstow will also be looking for runs after a poor Test. 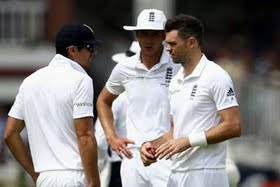 With leg-spinner Rashid in the squad, England will definitely be pondering upon their bowling combination. They usually do not play two spinners at home, but considering the amount of right-handers in the opposition, a leggie who moves the ball away could come in handy. Rashid though does not have a great record in his short Test career. He has played against Pakistan before, with limited success. The spot of Moeen Ali too will be under the scanner though. He hasn't been picking up too many wickets though, and the atrocious stroke that he played in the second innings at Lord's brought him plenty of flak. He could still keep his place as Steven Finn is also struggling for confidence.

As for Pakistan, they may have gotten off to a sensational start, but the celebrations should now end, and they must look to carry on with the momentum gained at Lord's. While Misbah ul Haq and Asad Shafiq shone with the bat in the first Test, leggie Yasir Shah will again be their key weapon. How England play him could be the deciding factor of the game. Also, even as Pakistan overcame England at Lord's, they still have some worries to deal with. Mohammad Hafeez and Shan Masood failed with the bat, and while Younis Khan spent time at the crease, he did not have the runs to show. Last, but not the least, Mohammad Amir still has to re-prove his worth in Tests.