Need to back and trust the XI that the team management has picked: Mohammed Shami on Ashwin’s exclusion

Team India pacer Mohammed Shami refused to comment too much on off-spinner Ravichandran Ashwin’s non-inclusion for the third India-England Test at Headingley. Ashwin was not picked in the playing XI for the first two Tests as well.

Asked about Ashwin’s continued non-inclusion, Shami said at a virtual press conference following the second day’s plat at Headingley that it was important to back the team management’s decision as far as the playing XI is concerned

Shami said, “I wouldn’t like to comment on the selection. That’s a team management decision. The XI that’s there on the field will have to do the job. We need to back and trust the XI that the team management has picked. You can’t think of it (selection) too much.”

On why India’s bowlers were not as effective as their England counterparts, Shami reckoned that the pitch was too slow for the bowlers to make any kind of impact. He explained, “As the pitch slows down, it gets difficult with less bounce and less carry. As you saw, we also got the edges. When the wicket slows down, it stops swinging and seaming.” 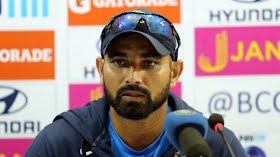 “The chances of getting reverse swing reduces in such conditions where the wicket is green. The pitch was very slow today. The key is not to over-think and understand how the wicket is behaving and adapt accordingly. If it’s slow, then the key is to bowl good line and length,” he added.

Shami was the pick of India’s bowlers with three wickets. However, the visitors are literally gasping for breath in the Test. India were all out for 78 in 40.4 overs, batting first after winning the toss. Joe Root’s third ton of the series has put England in complete ascendancy after Day 2. Root scored 121 while Dawid Malan scored a brilliant 70 on Test comeback. Earlier, openers Rory Burns and Haseeb Hameed also scored half-centuries as England exercised complete domination over India.