From Crease to Commentary Box: VVS Laxman moves on

VVS Laxman made his debut for the Star Sports commentary team during the first test at Chennai, six months after his retirement from international cricket. And just like the exquisite flicks that directed balls that should properly be played through the offside to leg...

VVS Laxman made his debut for the Star Sports commentary team during the first test at Chennai, six months after his retirement from international cricket. And just like the exquisite flicks that directed balls that should properly be played through the offside to leg, his opinions were thoughtful and his pronouncements precise. Like his batting, he was never hurried, never tried to hog the show, and always had something interesting on offer.

To the commentary team he added the empathetic perspective of someone only recently removed from the heat of battle. During the gamebatting great Sunil Gavaskar, who played his last test in 1987, expressed outrage that the forward short leg and other close-in fielders were vigorously appealing for LBW when in no position to do so. Laxman chuckled, explaining that it was a matter of supporting the bowlers, and, he added, “when you play with someone like Anil Kumble…” The others in the box joined in the laughter. “Now that it has been explained like that,” Gavaskar responded, “I understand.” We all did. 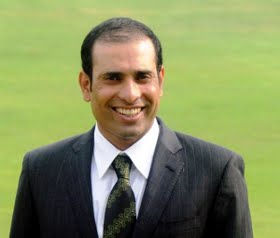 In a way, it was fitting that the very very special one made his commentary debut against Australia, becauseno team was made to suffer under his elegant blade as much. His 88 in his first youth test against the pace of Brett Lee, Jason Gillespie and Matthew Nicholson in February 1994 gave a hint of what the future had in store. Having never experienced the ball coming at him at such velocity before, he practiced with wet tennis balls and plastic balls between games. In the second test of the series he reeled off 151* and 77 before signing off with 84 in the last test.

Making his test debut in November 1996 the Hyderabad batsman never stepped into full stride until Sydney, 2000. His 167 in the second innings -- the next highest score being Ganguly’s 25 --started a love affair with the ground that saw him collecting a further two hundreds there: 178 in 2004 and 109 in 2008 – all of them classics from the top drawer. Talking to Wisden India, he mentions being in the “zone,” that place where sportsmen experience everything in slow motion, for the first time in his career during his first Sydney century. And though he never said it, one imagines it is a place he returned to many times afterwards.

The very, very special one persecuted the Aussies when they visited India as well. In 2001 came the innings of his life at the Eden Gardens, made with his side following on 274 behind. Not only did the innings change the trajectory of his career, it changed the trajectory of Indian cricket, heightening confidence and demanding a new level of respect from opponents. This is how he put it in the aforementioned interview:

“It changed our mindset as a team. It instilled in us the belief that we must never give up. If 167 changed the way I viewed cricket, 281 altered the cricket world’s perception of India…During my career, the team was to be in such situations many times later, including in Adelaide 2003-04. We remembered what happened in Kolkata, and the rest, as they say, is history.”

VVS was such a tormentor to the Australians that former captain Steve Waugh offered that of all the great batsmen that staffed India’s famed line-up in his time, Laxman’s scalp was the most prized. At Mohali in 2010, batting with the tail and a bad back that ruled him out of the next game, he had his last pivotal performance against Australia, bringing his side back almost from oblivion to an unbelievable victory by one wicket.

Now that the great man has taken to the commentary box, those of us that venerated him as the game’s most lordly batsman welcome the opportunity to hear him opine on the game. If he brings even half of the skill and dignity to the commentary box that he did to the middle, then the cricket audience will be well served.