Ravindra Jadeja has admitted that the Shimron Hetmyer’s run-out was not as cool as it seemed on camera, and that he was actually confused

Ravindra Jadeja has admitted that the Shimron Hetmyer’s run-out was not as cool as it seemed on camera, and that he was actually confused.

“Both batsmen were at the same end, so I thought I can get him easily. And I kept walking, and suddenly I saw him running and I had to throw the ball at the stumps. It was funny. I can't imagine that, I knew if I could go close to the stumps, I could get him," Jadeja was quoted as saying in a Sportscafe report.

After a decent Test in England and an impressive Asia Cup campaign, Jadeja is hopeful of finding a permanent place in the team. 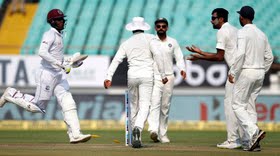 On Friday, Jadeja also smashed his much-wanted maiden Test ton. On it, the all-rounder said. "After nine years of intensive cricket, I'm scoring a hundred. It's been a special moment. Every time I reach 70 or 80, I think about the hundred. Today, I finally crossed the line,” he signed off.