After all the build up, India will finally begin serious business when they take on West Indies in the first of the four Tests beginning on Thursday. Although West Indies is not among the strongest opponent in Test cricket

After all the build up, India will finally begin serious business when they take on West Indies in the first of the four Tests beginning on Thursday. Although West Indies is not among the strongest opponent in Test cricket, there has rarely been such a huge preview to a series featuring India in recent times. This has primarily been due to what transpired in the run-up. India got a new coach in Anil Kumble under somewhat controversial circumstances. And, the hype around the same has refused to die down ever since. As such, India will be raring to have a go on the cricket field.

There have been some rather interesting developments even in the short period that Kumble has been in charge. He has conducted special bonding sessions for the team, has interacted with cricket fans on Twitter, and has been even discussed the road map for Indian cricket going ahead with the captains. How much impact it will have on Indian cricket, only time will tell. But, what has been clear ever since Kumble has taken over as coach is fact that he is a man on a mission who wants to make a difference, and has a definite plans towards the same. With all due credit to Ravi Shastri, he was lacking in this aspect. And, one just got the feeling that he had been around the Indian team for a bit too long.

Coming back to the match, India will in all probability go in with three spinners, and two pacers at Antigua. Although a tinge of grass was seen on the surface, it is more a case of holding up the pitch together for five days. The fact that Ravindra Jadeja is back in the scheme of things helps add balance to the playing eleven. Ravichandran Ashwin will be under a bit of pressure to deliver although he is the lead spinner. Apart from Sri Lanka and the series' played at home, he hasn't been successful abroad. Leggie Amit Mishra also will have a point to prove, as he hasn't played too many matches outside the subcontinent. 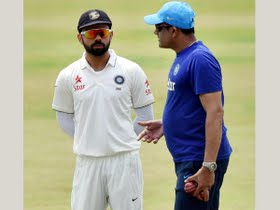 India will have to do some serious thinking over their team composition in both the batting and bowling department. While Ishant Sharma will be the first choice fast bowler for sure, there will be a toss up between Mohammed Shami, who is returning from injury, and the inconsistent Umesh Yadav for the second pace bowler's slot. Further, while India will in all probability go in with Murali Vijay and Shikhar Dhawan as the opener, Lokesh Rahul, who has been in excellent form, will be breathing down the latter's neck. The think tank might even be pondering whether to play Rahul instead of Cheteshwar Pujara. As for Rohit Sharma, the five bowler theory keeps him out for now.

West Indies will have a tough task against the strong Indian side. But, they would like to utilise the home advantage to the best of their ability. As for the match-winners, they will be heavily dependent on two players, Darren Bravo and Marlon Samuels. Both are highly experienced Test players, but do not also perform to potential. Jermaine Blackwood has impressed during his strong stint with the team, and will look to continue his good work. In the bowling Shannon Gabriel, who has been effective in his short Test career will be crucial along with of course skipper Jason Holder. In the spin department, Devendra Bishoo will shoulder the major responsibility.