IPL 2016 match 36 preview: Delhi look to bounce back against Punjab

Delhi Daredevils will take on Kings XI Punjab in match number 36 of the Indian Premier League at Mohali on Saturday evening. Delhi went down to Rising Pune Supergiants by seven wickets in the previous match. Zaheer Khan, who was down with a niggle, had to sit out of that match, and that definitely affected the side. They will look to get back among the winning ways when they take on Kings XI Punjab, who just don’t seem to get off the last place. They have only two wins from eight matches. They too, however, would like to get a win under their belt.

Delhi made a lot of changes in the previous matches, resting some of their key players, and it definitely affected the team’s fortunes against Pune. First and foremost, they would hope skipper Zaheer is fit for the important contest. In the last few matches, the veteran left-armer has upped his game, and has been consistent at the start of the innings, and also towards the death. Another big name who was rested for the previous game was Quinton de Kock. He has been in excellent form for Delhi at the top, and his return will definitely boost the team. 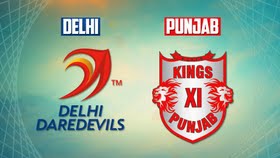 There are a few other players who will also be key to Delhi’s fortunes in the match. Sanju Samson hasn’t been in great form in the event, but he remains a crucial cog in the batting line-up. Then, there is also Karun Nair, who has already won one match for the team with his batting exploits. Opener Rishabh Pant has been an impressive find for the team. In the bowling, Delhi will again depend heavily on Amit Mishra. The experienced leggie has been consistent throughout the event, and will look to continue the good work.

As for Punjab, nothing has seemed to change their poor fortunes. They decided to replace David Miller with Murali Vijay, but that hasn’t really done much to change their fortunes. The fact that Miller has struggled with the bat has only made matters worse for the team. Vijay has been decent with the bat, but has been nowhere as near as dangerous as he was when playing for Chennai Super Kings. The fact that the big-hitting Glenn Maxwell has failed also hasn’t helped the team’s cause. South Africa’s dependable Hashim Amla has been included in the squad, so Punjab will hope it can change their fortunes.

Punjab have struggled in the bowling department as well, for it has only been Sandeep Sharma who has kept the runs down. Mohit Sharma has been extremely disappointing while Marcus Stoinis’ inclusion also hasn’t made much of a difference. Axar Patel has a hat-trick to name, but apart from that he hasn’t been too impressive. Swapnil Singh played the last game, but conceded nearly 10 runs per over. Unless, Punjab come up with a sensational effort like Axar did a couple of matches back, it is difficult to see them win against Delhi Daredevils.