Ricky Ponting has become a liability now for Australia

Ricky Ponting came into the tests against South Africa in good state cricket form, racking up 355 runs for Tasmania at 118.33. Yet the man who is perhaps Australia’s greatest player since Bradman has failed in every visit to the crease so far this series and as he himself admits, is running out of time.

Ricky Ponting came into the tests against South Africa in good state cricket form, racking up 355 runs for Tasmania at 118.33. Yet the man who is perhaps Australia’s greatest player since Bradman has failed in every visit to the crease so far this series and as he himself admits, is running out of time. In the three innings of the first two tests Ponting has managed just 20 runs. Even more disturbing, however, are the ways he has been dismissed.

In the first test he failed to score when he was undone by a good delivery from Morne Morkel that bounced and held its line. In the second test, however, he was left embarrassed, sprawled out on the ground, bowled by a Kallis delivery that swung late to evade his outside edge. The delivery was challenging but Ponting’s feet were late and lazy and his balance awry.In the second innings his crooked bat could do no more than divert Dale Steyn’s innocuous delivery onto his stumps from outside off.

You could say that these are just two examples and therefore inadequate to stand alone as evidence. But his decline has not been sudden. There were signs some time ago that his reflexes had slowed and that his footwork was increasingly becoming uncertain. 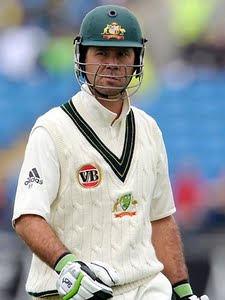 The West Indies travelled Down Under for the 2009-10 series, and Ponting was confronted by a searing short-pitched assault from the speedy Kemar Roach. Injured by a nasty blow to the elbow at Perth that forced the tough Australian to retire hurt one day, Ponting bravely resumed his innings next day but he seemed slightly reticent when facing the Barbadian thereafter.

Die-hard fans of Ponting would no doubt point out that not that long ago, early this year in fact, he scored two hundreds, including a mammoth 221, and averaged 108 in a series against India. Yet they would have to agree that India’s bowling unit on that tour and in those conditions was some way short of challenging.

In April this year, Australia was in the Caribbean for three tests. In the first innings of the Trinidad test, Kemar Roach, continuing the battle from their aforementioned encounter, got him with a peach of a delivery. Ponting was squared up by a ball that angled in, landed on off-stump, then straightened and bounced—one that would probably have defeated him in his prime as well.

What epitomized his troubles, however, was a delivery he faced a few minutes earlier. Roach bowled a short ball that flew high from a top-edge when Ponting tried to pull. It wasn’t a particularly quick delivery but the renowned punisher of everything short seemed harried. In his prime, he would have been on his back foot almost as soon as the ball was released, waited, and then decided which boundary board he would clatter, or where in the stands the ball would have to be retrieved.

Ponting has been a fierce, feared, and faithful warrior in his country’s cause. His record of 13,366 runs in 167 tests with 41 hundreds at an average of 52.21 indicates that the Tasmanian has been amongst the very best of all time. But as with all the other greats before him, there comes a time when their powers begin to wane, when, more and more, the body becomes unable to obey the commands of the mind.

The run-of-the-mill player is easier to handle in such circumstances. Aware that their abilities were limited to begin with, they, and their fans, find separation less traumatic. The dominating player, on the other hand, sometimes fails to come to terms with their diminishing abilities, and their fans often cling to the folklore long after the final chapter should have been closed. And if the question then becomes, who is it that is ready to replace him, then I would answer that it doesn’t matter. Heroes should not be allowed to regress to the point where they become unrecognizable.

Not that his legacy is in danger. Whatever happens from here, Ponting will still be remembered as the skillful, pugnacious player that he is. Boxing great Muhammad Ali remained “The Greatest” despite being humiliated by a lumbering Jamaican journeyman in the Queen Elizabeth Stadium one night in 1981. Ali lost to Trevor Berbick that fateful night because it was way past the time when he should have hung up his gloves. In other words, Ali was no longer Ali.

Ponting is now no longer Ponting. He is but a shadow of the batsman that his country so often relied on and who gave opposing bowlers cause to toss and turn and sweat throughout many a night. It may just be time for the great Australian to lay down his bat.