IND vs SA 4th ODI: India showed good character at Chennai to win the hard-fought ODI, and level the series going into the decider on Sunday at the Wankhede Stadium in Mumbai.

India showed good character at Chennai to win the hard-fought ODI, and level the series going into the decider on Sunday at the Wankhede Stadium in Mumbai. While the eventual margin of victory was quite a comfortable one for India, things weren't as easy as the scoreboard suggests. For a brief period, South Africa were definitely on top of India. This situation arose both when they were batting and fielding. But, India managed to find a way out to quell the Proteas challenge, showing excellent skills whilst using the home conditions to their advantage. After the poor display at Rajkot, it was the much needed competent performance from Team India. 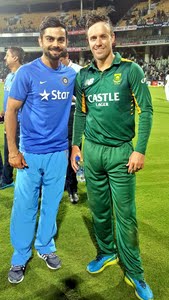 There were a couple of key factors that separated the two sides. One was definitely the innings played by Virat Kohli. His knock led to India putting up their first commanding batting effort in the series. When Kohli gets a big hundred, India invariably win, and the Indian batsman proved the same again on Thursday. Unlike Rajkot, where he struggled to time the ball, this was a more fluent knock. Kohli came in when India were in trouble, but ensured that the team maintained an impressive run rate when he was out in the middle. To his credit, Kohli carried on even after crossing the hundred mark, and that also made a difference.

What India did well during the innings, something which they had failed to do during the earlier games, was built partnerships. There were two 100-run stands in succession, and when that happens you normally end up getting a reasonable score. Ajinkya Rahane, who was back at his usual number four spot, did well to rotate the strike. However, he needs to begin converting starts into bigger scores. A massive relief for India came in the form of Suresh Raina, who chipped in with a half-century. Raina did well to rotate the strike and hold himself back early on. Under pressure having failed in the previous games, it was a fifty he so desperately needed.

Another game changing aspect of the match was the way the Indian spinners bowled. On a surface where Imran Tahir and Aaron Phangiso failed to make any impact, the Indian trio of Harbhajan Singh, Amit Mishra and Axar Patel got the ball to talk. Harbhajan in particular was most impressive, bringing all his experience into play. True, the pitch aided the slower bowlers a lot more in the second half, but the Indian spinners must also get credit for utilising the conditions. Even in the win, a couple of worries remain though. India failed to get going with the bat at the end again, falling short by a good 20-25 runs. Also, Shikhar Dhawan's form remains wretched.

For South Africa, skipper AB de Villiers played yet another scintillating innings that did not deserve to end up on the losing side. But, South Africa suffered because they missed two of their other key match-winners who are out injured. In the absence of Morne Morkel, the South African pace attack lacked sting. Although they adopted Morkel's mode of success at Rajkot, pitching it short, they could not generates the awkward angles. Also, the Proteas were one batsman short with JP Duminy unavailable. Chris Morris was batting too high, and the way the rest struggled, de Villiers needed Batman at the other end to pull off an improbable victory.