England managed to draw the 3-match T20I Series with a comprehensive 28-run victory in the Third and Final match at Edgbaston in Birmingham.

England managed to draw the 3-match T20I Series with a comprehensive 28-run victory in the Third and Final match at Edgbaston in Birmingham. After posting a formidable total of 118 in a reduced contest of 11 overs, England kept the Proteas down to 90 for 5. Hashim Amla once again showed his class, this time scoring 36 from 27 balls with 6 fours but the equation was beyond his abilities.

The hosts had an easy outing on the field as Graeme Swann and left-armer Danny Briggs got the ball to turn square. The Proteas had already lost the plot because of conceding a massive total in the first half. Jos Butler for his match-changing cameo got the Player of the Match award. 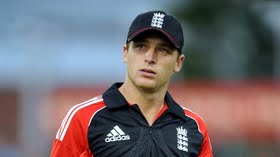 England Innings Update: An incredible blinder from Jos Buttler along with a beautiful fifty from opener Craig Kieswetter took England to an imposing total of 118 for 5 in the allotted 11 overs. Kieswetter held the innings together with 50 from 32 balls with 3 fours and 3 sixes. It was Jos Buttler’s cameo of 32* from 10 balls with 2 fours and 3 sixes that took the game away from the Proteas.

Left arm fast bowler Wayne Parnell had a horror day as his second over was taken for 32 runs by Jos Buttler which also included a couple of noballs.

Toss and Teams: South Africa have won the toss and elected to field in a reduced contest of 11 overs. Both the sides have made changes to their line ups. For England, Michael Lumb, Danny Briggs and Tim Bresnan replace Alex Hales, Samit Patel and Steven Finn. For the Proteas, Faf du Plessis and Wayne Parnell take the places of JP Duminy and Dale Steyn.

Rain delay: The third and final T20I at Edgbaston in Birmingham between England and South Africa has been delayed by rain and wet outfield. The second T20I which was at Manchester was abandoned because of rain. South Africa are leading the 3-match series 1-0 having won the opening T20I at Chester-le-Street by 7 wickets.