Afghanistan prove they can only get better with exposure

When Afghanistan took a look at the pool they were placed in for their maiden World Cup campaign, they would have targeted the game against Scotland as their genuine opportunity to claim a victory.

When Afghanistan took a look at the pool they were placed in for their maiden World Cup campaign, they would have targeted the game against Scotland as their genuine opportunity to claim a victory. That they achieved the same was a vindication of the fact that they were considered superior to the Scots even though the latter had featured in the World Cup before. The clash against Bangladesh was another game they would have been confident of winning, particularly since they had beaten them earlier in the Asia Cup. The loss was definitely a missed opportunity for them. The defeats against Australia, New Zealand, England and Sri Lanka were on expected lines. 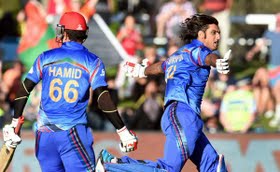 In spite of tasting victory in one of their matches, thus opening their World Cup account, Afghanistan should be slightly disappointing with their overall effort, especially in the batting department. They were the only side to not have registered an individual hundred in the tournament. Pakistan corrected their flaw in their last league game against Ireland. For Afghanistan, Samiullah Shenwari's 96 was the highest individual score, coming in that historic win against Scotland. Overall as well, Shenwari was the only batsman who performed consistently for the team, which is why their batting did not make for impressive reading.

It is not that Afghanistan lack talent in the batting department. Nawroz Mangal and skipper Mohammad Nabi are two players who are rated very highly back in Afghanistan. They have had their moments to remember in the international arena too. But, on the biggest stage to display their talent they faltered. If the ICC sticks to its decision of restricting the World Cup to 10 teams for 2019, Afghanistan are certain to miss out, and in that scenario, Nabi and Mangal, among many others, would have played their first and last World Cup. The two stalwarts of Afghanistan cricket might thus end up regretting not being able to make the best of their opportunities.

If there is one aspect of their play that has been extremely impressive, it has been their pace bowling. The two Zadrans, Shapoor and Dawlat, bowled with zest throughout the event even though the results were not going their way. Shapoor was particularly impressive with his ability to pick crucial wickets with good deliveries. The duo was backed up very well by Hamid Hassan, who was equally impressive in the manner in which he went about his task. In many ways, Afghanistan were the reverse of Ireland in the World Cup. If only they had a spinner to support their fast bowlers, they could have been even more effective.

Although Afghanistan did not set the stage on fire in their maiden World Cup attempt, they did display enough signs to indicate that they can improve with experience. Unfortunately, as mentioned earlier, if the ICC maintains its stand of reducing the number of teams for the next World Cup, teams like Afghanistan are bound to suffer immensely. Hopefully, for the betterment of Associate cricket and, in turn world cricket as a whole, the sport's governing body will reconsider its decision to axe the minnows from cricket's premier tournament. Unlike earlier editions, the lower-ranked sides have been competitive, and deserve to be given opportunities to improve.