A classy unbroken partnership of 172 runs between Hashim Amla and Skipper AB de Villiers saw the Proteas defeat England by 7 wickets in the fifth and final ODI at Trent Bridge in Nottingham.

A classy unbroken partnership of 172 runs between Hashim Amla and Skipper AB de Villiers saw the Proteas defeat England by 7 wickets in the fifth and final ODI at Trent Bridge in Nottingham. The tourists after bowling out England for just 182 reached the target in just 34.3 overs thanks to cracking knocks from both Amla and de Villiers.

It wasn’t an easy chase though for South Africa as they found themselves rattled up at 14 for 3 in the 5th over when AB de Villiers joined Hashim Amla. SA lost its first wicket in the 2nd over when Graeme Smith edged his cut shot off Jade Dernbach to second slip. James Anderson in the 3rd over got Faf du Plessis nick behind a seaming delivery and then had the left-handed Dean Elgar also nicking behind a rising delivery to the keeper. 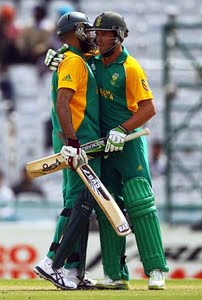 Despite England coming back in the game, Amla and de Villiers with their class and technique ensured that there was no further damage. England failed to prevent the boundaries from flowing regularly on a good batting track. Amla stroked his way to an unbeaten 97 from 109 balls with 9 fours and a six. AB de Villiers was simply superb with his straight drives as he went onto score a busy 75* from just 79 balls with 10 fours.

England Innings Update: England have been dismissed for a poor total of 182 on a good batting surface at Trent Bridge in Nottingham. Most of the wickets taken by the Proteas were courtesy of some terrible shots played by the English batsmen. The tourists are now favourties to win the match and draw the series 2-2.

The hosts lost an early wicket in the in-form Ian Bell (10) in the 4th over when he got lbw to an arm ball from Robin Peterson, who opened the bowling with his left-arm spin. Ravi Bopara continued to struggle with the bat as he departed for a second ball duck nicking behind an away going delivery from Dale Steyn to make it 24 for 2 in 4.3 overs.

Skipper Alastair Cook and Jonny Bairstow then took over and rebuilt the English innings with a fine partnership. However, in the 19th over, Bairstow (29 from 52 balls) got out when his impressive pick up shot off Morne Morkel found the throat of deep backward squareleg to leave England at 79 for 3. Just five balls later, Eoin Morgan lost a nut from his brain as he charged down the track in just the second ball of his innings to drag a slog off JP Duminy into the hands of mid on for a duck!

By the 26th over, South Africa saw the back of the well set Alastair Cook (51 from 72 balls with 6 fours) when he patted a low return catch off a dipping full toss into the hands of leggie Faf du Plessis. England was in tatters at 99 for 5. Useful contributions from Wicket Keeper Craig Kieswetter (33 from 53 balls) and Chris Woakes (33*) helped the hosts to a somewhat respectable total of 182 before the innings got all over in 45.2 overs.

Robin Peterson with his innocuous spin got 3 for 37 in 10 overs while Dale Steyn and Morne Morkel chipped in a with a couple of wickets each.

Toss and Teams: England have won the toss and elected to bat first in the fifth and final ODI at Trent Bridge in Nottingham. The hosts, who are leading the 5-match series 2-1, have made two changes with Jonny Bairstow and Chris Woakes replacing Jonathan Trott and Steven Finn. South Africa have brought in Justin Ontong and Morne Morkel in the place of Ryan McLaren and Lonwabo Tsotsobe.