The most significant piece of cricket in the whole tournament probably came from West Indian player Dwayne Smith.

The most significant piece of cricket in the whole tournament probably came from West Indian player Dwayne Smith. The West Indies was one run away from exiting the tournament when he made his telling contribution. The Pallakele Stadium was humming when Doug Bracewell played the game’s final delivery to deep square leg and set off for the first of the two runs required to bring victory and a semi-final spot for New Zealand.

First run completed, he turned for the winning run when Smith swooped, picked up, and in what might have been the most important play of the whole tournament, threw down the wicket with Bracewell short of his ground. This meant that the game was now tied, and would need the Super Over to determine the winner. 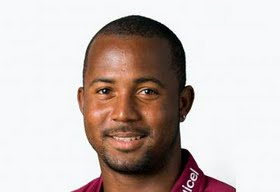 Marlon Samuels was the West Indies’ emissary to deliver the Super Over, from which he allowed 17 runs. He then returned with Chris Gayle to face Tim Southee and deposited the New Zealander’s fifth ball over the head of Martin Guptil on the deep midwicket boundary to send the West Indies into the semi-finals against Australia.

Four days later the men from Down Under stood little chance as Chris Gayle, sensibly batting through the innings for 75, led the West Indies to 205 and a thumping victory over Australia who could only manage 131 in return. The West Indies were now in the finals and in a position to win their first world title since the unlikely pair of Courtney Browne and Ian Bradshaw guided them to the ICC Champions League trophy in 2004.

That they went on to defeat Sri Lanka to claim the T20 World Cup crown is a boon for the long-suffering fans of this once all-conquering side. Marlon Samuel’s match- winning 78 has been widely regarded as one of the great innings of the limited overs format. And it was. The way he manhandled Lasith Malinga, probably the best T20 bowler in the world, was special, taking 39 runs from the 11 deliveries he faced from the Sri Lankan trump card.

But all of this almost never happened. A few inches to the right or to the left and Dwayne’s Smith dead-eyed throw from the deep that gave his side a second chance in the game would have missed, and the Kiwis would have been through to the semis instead. There would then have been no heroics from Gayle and Samuels and Narine; no T20 World Cup trophy for the West Indies; and no gangnam style celebrations.

Smith only started one game in this tournament. On September 22 he opened the batting with Chris Gayle against Australia and had faced only five deliveries before Mitchell Starc bowled him for two. The Barbadian all-rounder never got the chance to bowl in that rain-affected game that Australia went on to win by 17 runs under the Duckworth/Lewis method. Being an outstanding fielder, however, he was the first player coach Ottis Gibson turned to whenever the team required a substitute fielder.

The aggressive Barbadian began his international career with a scorching hundred at Cape Town in 2004. Understandably, those who viewed his debut century foresaw a long and distinguished career for him under the maroon helmet. It didn’t turn out that way and he and his fans would undoubtedly have been disappointed with the way his career has turned out. His last test match was in 2006 and only sporadically has he been chosen for the limited over games. But if he does nothing else for the rest of his career he can proudly tell his grandchildren of the dramatic way that he affected the 2012 T20 World Cup.

The West Indies would want to use this victory as a springboard for greater achievements in the future. Caribbean fans will be hoping for a return to the days when their side strode atop the cricketing world for all of 15 years. Dwayne Smith may or may not play a pivotal role in that future. But whenever followers of the great game recall this T20 World Cup triumph by the West Indies they should also remember the strong right arm and deadly aim of Dwayne Smith.