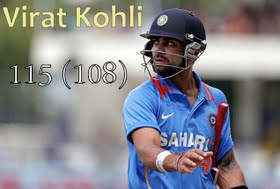 Brendan Taylor: First hour was vital, We didn't lose any wickets but we could have been a bit more proactive. Against a quality side like India we needed 270 on the board. Sikandar Raza played very well, showing good composure despite having hardly played any games. Prosper Utseya was good with the ball and hopefully next time we can come out and express ourselves a little better.

Virat Kohli is the Man-of-the-Match. Happy with the win. Always good to kick off a tour with a win and personally I was happy with the way I played. The ball was moving around a bit early on and it was all about percentage cricket, rotating the strike and then playing your shots at the end. Our bowlers did a very good job up front. The new ball was doing quite a bit in the morning and with two new balls you can't count any team out. Congratulations to Ambati Rayudu, he's got an India call-up after a long time and he's grabbed his opportunity very well.

Brendan Taylor says he would have definitely bowled first as well. He says the first hour against two new balls will be challenging but after that conditions should ease up for batting.

Winters in Zimbabwe are cold and dry and usually the pitches reflect this, favouring spin over seam and playing a little on the slow side.

1. Despite some notable successes, such as at the 1999 World Cup, Zimbabwe have only beaten India in 10 out of the 51 ODIs they've played against them since 1983.

2.The first obstacle for Zimbabwe's bowlers in a daunting Indian batting line-up will be the opening pair of Shikhar Dhawan and Rohit Sharma, who average 57.72 in partnership and have put together three century stands.

3.Of Zimbabwe's current batsmen, captain Brendan Taylor has by far the best record against India in ODIs, with 184 runs at 46 against them in four games.