The new and improved Marlon Samuels

Marlon Samuels’ 260, completed on the third day of the second test against Bangladesh, is his third century for 2012. The Jamaican made his debut in December, 2000 against Australia as a precocious 19 year old, and prior this year played in 37 tests, yet had only two hundreds to his name.

Marlon Samuels’ 260, completed on the third day of the second test against Bangladesh, is his third century for 2012. The Jamaican made his debut in December, 2000 against Australia as a precocious 19 year old, and prior this year played in 37 tests, yet had only two hundreds to his name.

The upward turn that his career has taken, he states, is a reflection ofa new maturity and the sense of contentment that he has achieved. He was always among the most talented players around, butwas thought to be hampered by an attitude that did not lend itself to high achievement in sport or in life. Now, the batting stylist is insistent on making up for lost time. 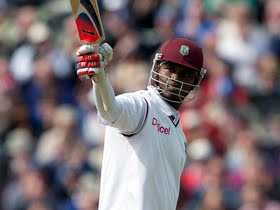 Referring to the time he spent in exile serving a two-year suspension for bringing the game into disrepute by accepting money from a bookie, Samuels remarked to Ian Bishop in an interview after his hundred against New Zealand in front of a doting Sabina Park crowd earlier this year, that he had “two years of runs put down,” and is indeed batting like a man who knows he has squandered past opportunities.

It would be an error, however, to say that it was his time away from the game that turned him around. He had shown signs during the 2007-8 South African tour that he was ready to assume his rightful place among the world’s top batsmen. In three tests against South Africa’s formidable bowling attack that included Dale Steyn, Makhaya Ntini and Andre Nel, Samuels racked up a total of 314 runs at an average of over 52. More significantly, he played with newfound patience and resolve – qualities that were previously lacking in his game. Artistry was now paired with tenacity and the future looked bright.

But right afterwards, while the West Indies hosted Sri Lanka in the Caribbean, word came that Samuels’ day of reckoning was fast approaching. It was then clear that actions that many fans -- and maybe even Samuels himself --felt would result in just a slap on the wrist were far more consequential than previously imagined. It hung over his head like a sword and, understandably, his game suffered during the Sri Lankan series. His subsequent two-year ban would have dealt him a huge blow, just when he seemed to be reaching for the top, and it would have been especially traumatic since he maintains that there was nothing nefarious about his actions.

That is all now behind him. Age often brings wisdom and it is evident that he now thinks more about his game than he did in his early days. He prides himself in his ability to play late, and he beamed when relating that the young players at the High Performance Centre in Barbados labeled him “the batting manual” on account of his textbook technique.

Relishing his every opportunity at the crease, he endeavors to be there for as long as he can. He speaks often of being patient and of leaving “buckets” of deliveries and he is reaping rich dividends from his new approach. Since the beginning of 2012, he has gathered over 860 test runs (including in this current game) at an average of over 86. Always easy on the eye, he possesses a gift of movement bequeathed to only a few.

Yet he is not all lazy elegance. He can hit with the best of them as he showed in this year’s T20 World Cup where his 15 sixes were only behind Chris Gayle’s 16, and he was responsible for the two longest sixes in the tournament. His lone hand in the finals led the West Indies to their first world title since their 1979 World Cup victory and would have stirred hopes for a better future in the hearts of longsuffering West Indies fans.

Samuels is now 31 and is undoubtedly dissatisfied with an average that stands in the mid thirties after 43 tests. He will therefore need to spend the rest of his cricketing days batting to add statistical heft to his obvious class.He seems to be aware that every turn at the crease needs to be maximized.