Kings XI Punjab defeated Deccan Chargers by 4 wickets after chasing down a target of 191 at Mohali.

Kings XI Punjab are alive and kicking in the IPL 5 after chasing down a massive target of 191 against Deccan Chargers. Skipper David Hussey led from the front in the run chase while young Gurkeerat Singh surprisingly overshadowed him with some stunning blows in the end to help Kings XI Punjab prevail in the final over.

This is now the seventh victory for Kings XI Punjab in 13 matches which takes it to 14 points to level with Rajasthan Royals. Kings XI looked in a bad shape chasing 191 as they slipped to 56 for 3 in 7.2 overs. However, a crucial partnership of 44 between Azhar Mahmood (31 from 20 balls with 2 fours and a six) and David Hussey put Kings XI on the track to chase the target. 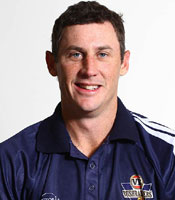 The real hero though was David Hussey as he lasted the distance to score an unbeaten 65 from 35 balls with 4 fours and 5 sixes. Gurkeerat Singh was the surprise package coming in with an unbeaten 29 from 12 balls with 4 fours and a six. The match went till the last over with 16 runs to win from the bowling off Manpreet Gony. Most of the over was faced by Gurkeerat Singh, who struck the ball sweetly in the gaps to take his side to victory.