The third and crucial Test between England and South Africa at Lord’s is just a couple of days away. However, instead of preparing for the big game, all the focus in English cricket is right now centred on the man named Kevin Pietersen.

The third and crucial Test between England and South Africa at Lord’s is just a couple of days away. However, instead of preparing for the big game, all the focus in English cricket is right now centred on the man named Kevin Pietersen. In spite of apologising to the ECB and showing his willingness to play for the country in all forms of the game, England’s best batsman in the team has been dropped for failing to prove that the text messages he sent to some South African players did not contain anything derogatory against England skipper Andrew Strauss and coach Andy Flower.

And, while the decision taken by the ECB is a brave one, considering the impact it will have on the Lord’s Test would be huge, the worrying aspect for England, as they look to save their number one crown, is that there have been too many distractions pertaining to Pietersen in recent times. In fact, even his excellent counter-attacking century at Headingley, which went a long way in England grabbing the upper hand in the match for a few sessions, was overshadowed. All this because, in a post-game press conference, the flamboyant England batsman admitted that all was not well between him and the ECB, and that there were many issues that needed to be sorted out. 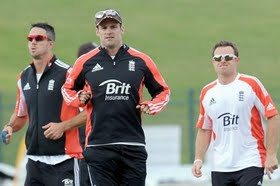 The moment off-field issues begin making news on the sports section, it is clear that the team is in trouble. The problem with the Kevin Pietersen controversy is that the issue has dragged on for too long, and still no solution seems in sight. In such a scenario, one wonders how England will be able to concentrate on the game when the deciding Test kicks off at Lord’s. It will be nothing short of a herculean task for Strauss to inspire his team to put up their best in a must-win game. The captain himself will have to come up with something special at the mecca of cricket.

By the way, if Strauss needs any kind of inspiration to deal with the situation, he only needs to go back a few seasons, when the captaincy was thrust upon him, following another fiasco with Pietersen as the main man in the picture. After a disastrous tour of India, Pietersen did not have too many kind words to say about then coach Peter Moores. The rift was soon out in the open, and the ECB was left with little choice but to shut the door of captaincy on Pietersen. Out of nowhere, Strauss was put in charge of the side, and Andrew Flower was given the task of coaching the side. That everything was not well with the England team was demonstrated when they were rolled over for 51 by the West Indies in Strauss’ first Test in charge. He and Flower though have gone on to resurrect England wonderfully well following that debacle.

Can they overcome another KP obstacle? Just wait and watch.