Asia cup T20 2016 Bangladesh vs Pakistan: Mohammad Sami bowled a poor penultimate over, conceding 15 runs, including two no-balls, one of which was eased for a boundary between point and short third man, as a close match turned Bangladesh’s way at Dhaka on Wednesday

Mohammad Sami bowled a poor penultimate over, conceding 15 runs, including two no-balls, one of which was eased for a boundary between point and short third man, as a close match turned Bangladesh’s way at Dhaka on Wednesday. Chasing 130 to secure a birth in the final, Mahmudullah and skipper Mashrafe Mortaza came together with the match evenly balanced at 104 for 5. Mohammad Amir had just sent back Shakib Al Hasan, but two roaring fours from Mortaza kept Bangladesh alive. Earlier, Mahmudullah had slapped Mohammad Irfan for six over mid-off. Mahmudullah also who hit the winning runs, dispatching an Anwar Ali full toss over deep midwicket.

Earlier, Bangladesh got off to a poor start, as Mohammad Irfan had Tamim Iqbal lbw for 7, not long after he had smashed a brilliant six early in the innings. Soumya Sarkar and Sabbir Rahman consolidated the innings, but Afridi struck a big blow when he cleaned up Rahman for 14. Sarkar, however, finally came to the party. He was at ease, pulling Anwar Ali for a six, and a four in the 10 over of the innings. In the very next over, he swept Afridi towards deep fine leg, as Bangladesh began to pull away. 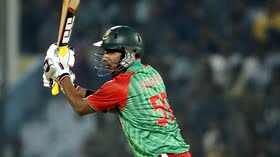 Sarkar, however, fell for a run-a-ball 48, bowled by an unplayable yorker by Amir. The ball was fast and straight, and disturbed the middle stump before Sarkar could get his bat down. Mushfiqur Rahim then played an uncharacteristic reverse sweep to fall lbw to Malik. And when Shakib was bowled by Amir, trying to scoop one fine, Pakistan were back in the game.

For Pakistan, wicket-keeper bat Sarfraz Ahmed contributed a valuable 58 not out from 42 balls, and Malik again chipped in with 41 from 30, but Pakistan still only managed 129 for 7 in their 20 overs. Ahmed and Malik added 70 for the fifth wicket, but Bangladesh’s bowlers yet again managed to stifle the opposition with some intelligent bowling. Taskin Ahmed stood out with brilliant figures of 1 for 14 from his four overs while Al-Amin Hossain was once again the most successful bowler with three wickets, and Arafat Sunny claimed 2 for 25.

For the third game in a row, Pakistan got off to a disastrous start with the bat. Hossain bowled a beauty to get rid of Khurram Manzoor, the ball pitching on a length and taking off. Manzoor was half-forward and gloved Hossain’s first ball, in the second over. Sharjeel Khan flicked a six over deep backward square leg, but was clean bowled by Arafat Sunny for 10 as he tried to hoick one out of the stadium. Mortaza then ensured Mohammad Hafeez’s poor run continued as he got one to come back him, and coaxed the umpire into an lbw. The ball seemed to be going over the stumps, but on the scoreboard it was wicket number three.

Umar Akmal, who played a key role in Pakistan preventing embarrassment against UAE, failed this time. He fell to Taskin for 4, leaving Pakistan reeling at 28 for 4. Taskin was absolutely brilliant in his spell, and had sensational figures of 3 for 1 at the start of his fourth over. Sarfraz and Malik batted with composure, mixing singles and twos with the boundaries. With Pakistan looking to open up, Malik fell to Sunny, at the threshold of the team’s 100. After Afridi tasted another failure, Sarfraz ensured Pakistan finished on a high, with some well-hit boundaries. It did not prove to be enough.