AUS vs IND 2nd T20 Preview, Live score: Not many would have imagined when the series kicked off that India would go into the second T20 at Melbourne as slight favourites, and with a chance to clinch the series.

Not many would have imagined when the series kicked off that India would go into the second T20 at Melbourne as slight favourites, and with a chance to clinch the series. But, such is the fast paced nature of modern-day cricket. The one-day loss now seems history, and India have the momentum having beaten Australia in two matches in a row, even though in different formats. Having said that, there is nothing really called form in T20 as one great performance, like the one by Virat Kohli at Adelaide, could be enough to clinch a match for the team. As for Australia, their seriousness when it comes to playing T20s will be under the scanner since they were off boil in all departments on Tuesday. 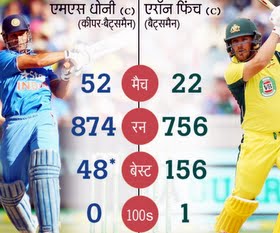 India would be most pleased with their effort in the opening T20, a kind of comprehensive effort they have failed to put together over a consistent period of time in the shorter formats. Kohli's continued success will undoubtedly please the team, and the supremely gifted talent would be keen to put up another good show, and, with it, seal the series at Melbourne itself. Rohit Sharma also played a crucial innings, a brisk cameo which set the tone of the innings for India. And while Suresh Raina did not look great, he did get among the runs. India would be desperate for Yuvraj Singh to come good in case he gets a chance to bat.

India's bowling also was much improved at Adelaide, thanks to the fact that there was some help for the spinners. But, most credit of all should go to Jasprit Bumrah. It was his bowling effort early on that put the brakes on the Aussie scoring rate, and resulted in a breakthrough. He was impressive throughout, and it was his bowling performance that made the big difference. The Australians have clearly failed to read his awkward angles, and India would hope the same continues at Melbourne as well. While Ravichandran Ashwin and Ravindra Jadeja were effective in the first game, they need to use better variations since MCG won't offer the same resistance. It would also be interesting to see whether Ashish Nehra can make an impact.

One of the reasons, India have a definite edge over the hosts is because the Aussie batting line-up will be weakened minus David Warner and Steven Smith who have been withdrawn keeping in mind the New Zealand challenge. The Australian batsmen clearly found themselves under pressure chasing a big score in the first T20. Skipper Aaron Finch was candid enough to admit that their batters played too many big shots, and could have planned their chase better. With Warner and Smith gone, they would be hoping for big-hitter Glenn Maxwell to be fit. The unavailability of regulars could mean opportunities for Shaun Marsh and Shane Watson, up the order.

Australia's bowling suffered at the hands of Kohli and Rohit. Shaun Tait, in particular, was wayward, proving he remains unpredictable as ever. But, Australia wouldn't be giving up on Tait just as yet. James Faulkner had a rare off day at Adelaide so he would be keen to make amends. Aussies will have to explore their bowling options well. It remains to be seen whom they choose among the likes of Kane Richardson and John Hastings in pace, and Nathan Lyon and Cameron Boyce in spin. Australia will also have to pull up their socks in the fielding as they were uncharacteristically off-colour on Australia day. All said and done, the hosts will need to make steady improvements on Adelaide show.