Mahendra Singh Dhoni feels he stepped down as India’s captain at the right time to allow the next captain to build the team towards 2019 World Cup. Since October 2016, Virat Kohli has been captain in all formats for India.

“I resigned from captaincy because I wanted the new captain to get enough time for preparing a team before the 2019 World Cup. Selecting a strong team without giving the new captain appropriate time isn’t possible. I believe that I left the captaincy at the right time,” Dhoni said at an event in Ranchi, before leaving for the Asia Cup, according to an ICC report.

Asked about India’s poor performance in England Tests, Dhoni put it down to lack of practice particularly for the batsmen. “The Indian team missed out on playing practice matches before the series, which is why the batsmen are finding it difficult to adjust,” 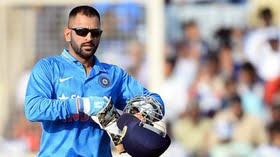 He however added, “This is a part of the game. We shouldn’t forget that India is currently No. 1 in the rankings.”

India kicks off its Asia Cup 2018 campaign on 18 September in Dubai against Hong Kong, followed by the big match against Pakistan the very next day.