Champions Trophy 2017: Basit Ali has high regard for Sarfraz as leader

Former Pakistan cricketer Basit Ali feels Sarfraz Ahmed as one of the best captains he had ever see after 1992.

Former Pakistan cricketer Basit Ali feels Sarfraz Ahmed as one of the best captains he had ever see after 1992.

Basit was speaking to The Nation Friday. Praising Pakistan’s turnaround in the tournament, he says, “The way Sarfraz led the side; his pin point decisions; his bowling changes; his grip and field placing were mind blowing. Sarfraz showed what the youngster possesses and has proved that he will be only getting better and better with time and ready to accept the responsibility of leading the green caps ultimately in the Tests as well.” 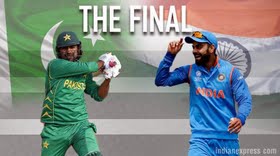 s also under enormous pressure but it was his very first match as captain of the national team against India and it was quite obvious he took lot of stick for that one mistake. But after that everybody had witnessed a completely transformed Sarfraz, a cool and calm and composed skipper, who was using his brain to make all the right decisions after the first hammering. Frankly speaking, Sarfraz had shown the guts and leadership qualities which were missing since decades,' he further told Nation Today.

Basit went on to slam Aamer Sohail’s indirect accusations of match-fixing.“ Pakistan team had performed brilliantly and they deserve to win and all was done due to unity and hard work and no one presented or gifted victory to Pakistan,” he added.

About Pakistan’s game plan for the final, Ali felt getting rid of Dhawan, Sharma and Kohli is the key.“The y are on a roll and the way they demolished England is indicating that Pakistan had picked the momentum at the right time. India will have the strength of its sound batting but it revolves around three top batsmen, Dhawan, Sharma and Kohli. If Pakistan bowlers managed to take these big three conceding 70 or 80 runs, they can easily handle Yuvraj, Dhoni and others as well.”