It was Sri Lanka, not South Africa, who choked at Sydney

Going into the first quarter-final of the ICC Cricket World Cup 2015, South Africa would have been under tremendous pressure, and for reasons not unknown.

Going into the first quarter-final of the ICC Cricket World Cup 2015, South Africa would have been under tremendous pressure, and for reasons not unknown. They had never won a knockout game in the sport's premier tournament. They have been unlucky at times, but definitely had their chances in the past, failing to make it count. The closest they came to win a knockout clash was during the famous 1999 semi-final, which they tied. On that occasion as well, the pressure got to them. At Sydney, however, they were completely on top of their game, and came up with a totally ruthless performance. AB de Villiers had stated in the preview to the game that they wouldn't choke, and they didn't. 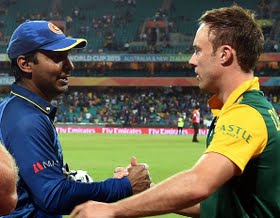 The manner in which the game panned out, one would be forced to wonder whether it was Sri Lanka who choked. They made some strange choices for such a big game, and the manner in which they went out and batted was pretty much incomprehensible. First and foremost, the decision to open with Kusal Perera was baffling. It wasn't as if Sri Lanka had a problem at the top of the order. On the contrary, Lahiru Thirimanne had been doing reasonably well as opener, even notching up a century. There is an old saying that if it ain't broken, don't break it. Sri Lanka did not pay heed to the wisdom, and had to pay heavily. Perera fell early, and Sri Lanka were in trouble right away.

The pitch at Sydney was a tricky one to bat on, but it must be said that the Lankan batsmen did not exhibit the application needed to survive on the kind of surface that was on offer. In fact, most of the batsmen, including seniors like Tillakaratne Dilshan, Mahela Jayawardene and even skipper Angelo Mathews fell playing attacking strokes, when the ball wasn't quite there. Kumar Sangakkara was the only one who gauged the pitch correctly. However, his effectiveness was reduced by the constant loss of wickets. If one criticism has to be made of Sangakkara himself, it is that he did not rotate the strike at all. Again, he could have done better with some support.

Even as Sri Lanka should be gutted by their batting display in such a big match, one cannot but have praise for the manner in which Dale Steyn and co came out and bowled. They were on the button right from the word go, and strangled the Lankans. The manner in which they completely blocked Sangakkara's scoring options was extraordinary. The man who had four hundreds going into the quarters was made to struggle for every run. Neutralising the Sangakkara threat was a major victory for the Proteas. The performance of their two spinners, Imran Tahir and JP Duminy, was also a standout aspect of their bowling stint.

Once South Africa bowled out Sri Lanka cheaply, they only needed a decent start to completely move the game in their favour. Having said, they would still have been worried over the form of Quinton de Kock. The opener had hardly scored a run in the series. But, the talented batsman reposed the faith placed in him by the team management, and came up with a knock that completed Sri Lanka's annihilation. It was an extremely sad way for Sangakkara and Jayawardene to go. They would have at least wanted to put up a fight. But, the simple truth is that South Africa were way too good.