IPL 2013 Opening Ceremony Live Videos online Streaming: The sixth edition of the Indian Premier League will kick off today with what promises to be a glitzy opening ceremony featuring Bollywood stars and international rapper Pitbull.

The sixth edition of the Indian Premier League will kick off today with what promises to be a glitzy opening ceremony featuring Bollywood stars and international rapper Pitbull.

Flying drummers, Chinese percussionists, fireworks, and some of the biggest film stars in the country, including Shah Rukh Khan and Katrina Kaif, will perform at the ceremony at the Salt Lake Stadium.

Never before in cricket has any private tournament been as successful as the IPL and it is expected to be a rollicking affair once again when the nine franchises lock horns for the coveted title.

The Shah Rukh Khan-owned Kolkata Knight Riders, the defending champions, have earned the right to host the opening ceremony.

KKR will also host the IPL opener, on Wednesday, when they take on Delhi Daredevils at the Eden Gardens that will also witness the summit clash on May 26. 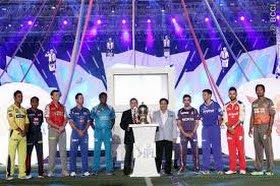 Sunrisers Hyderabad will make their debut replacing Deccan Chargers, terminated by the IPL Governing Council following a breach of contract.

Known for controversies, the upcoming IPL has already made headlines for all the wrong reasons following Tamil Nadu Chief Minister J Jayalalitha’s ban on Sri Lankan players’ involvement in the Chennai leg of the tournament.

Jayalalitha, in a letter to Prime Minister Manmohan Singh, refused to host the Lankans in view of the growing political tensions, stemming from the treatment of ethnic Tamils in Sri Lanka.

Bowing to the intense political pressure, the IPL GC asked the 13 Lankan players, three of them franchise captains, not to play in Chennai that will host 10 matches, including two eliminators.

Continuing the controversy trail, in a setback for KKR, the Mumbai Cricket Association affirmed that the ban on the team’s principal owner, Shah Rukh, would remain.

The actor allegedly manhandled security and hurled abuses in an inebriated state after being stopped from entering the ground last year. A miffed MCA had subsequently imposed a five-year ban on the Bollywood star.

Amid the glitz and glamour, all eyes would be on the most successful IPL side, two-time champions Chennai Super Kings, who have also been two-time runners-up.