Super 10: Players who have carried their bats in ODIs

New Zealand opener Tom Latham carried his bat during the first ODI between India and New Zealand at Dharamsala on Sunday. Latham batted for 178 minutes and faced 98 balls during which he hit seven fours and a six. He remained on 79 when the last man Ish Sodhi was dismissed in the 44th over as New Zealand folded up for 190 and went on to lose the match by six wickets. During the course of the innings, Latham became the 10th player to carry his bat in one-dayers. A look at players who achieved the feat before him. 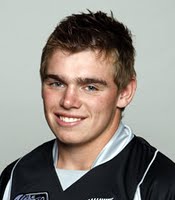 Grant Flower: The Zimbabwe opener made an unbeaten 84 from 143 balls as his side batted first against England at Sydney as part of the Benson & Hedges World series on December 15, 1994. Grant was at the crease for 199 minutes during which he hit six fours. Zimbabwe were bowled out for 205, but managed to keep England down to 192, and win by 13 runs.

Saeed Anwar: Pakistan were chasing 220 to win the game against Zimbabwe at Harare on February 22, 1995. The game ended in a tie as Pakistan were all-out for 219 in 49.5 overs. Anwar finished unbeaten on 103 from 131 balls with six fours. He occupied the crease for 194 minutes. Bryan Strang starred with 4 for 36 for Zimbabwe.

Nick Knight: The England opener was unbeaten on 125 against Pakistan at Trent Bridge on September 1, 1996. He faced 145 balls and hit nine fours during his 210-ball stay. England made 246, but went on to lose by two wickets.

Ridley Jacobs: The wicket-keeper was unbeaten on 49 during the World Cup match against Australia at Manchester on May 30, 1999. Jacobs faced 142 balls and hit only three fours during his stay which lasted for a little under 200 minutes. West Indies were all out for 110, and Australia won by six wickets.

Damien Martyn: He made 116 not out against New Zealand at Auckland on March 3, 2000. Martyn faced 135 balls during which he hit 13 fours and a six, and batted for 188 minutes. Australia were however bowled out for 191, and New Zealand won by seven wickets.

Herschelle Gibbs: South Africa were chasing 169 against Pakistan at Sharjah on March 28, 2000. Gibbs was unbeaten on 59 from 79 balls, in 140 minutes, with nine fours. But, the Proteas were cleaned up for 101 all-out.

Javed Omar: The Bangladesh opener was unbeaten on 33 from 86 balls, with two fours and one six, against Zimbabwe at Harare on April 8, 2001. Chasing 231, Bangladesh managed only 103.

Azhar Ali: The Pakistan ODI skipper, who recently hit 302 in Tests, was unbeaten on 81 against Sri Lanka at Colombo on June 16, 2012. Pakistan were chasing 244 in the match, but were all out for 199. Ali hit four fours and a six during his 217 ball stay, but it wasn’t enough to save Pakistan.