Yuvraj praises Stokes, says he could get big IPL deal

Yuvraj Singh praised England all-rounder Ben Stokes, and predicted that he could be one of the big buys at the auction for this IPL.

Yuvraj Singh praised England all-rounder Ben Stokes, and predicted that he could be one of the big buys at the auction for this IPL. The auction for this year's edition is set to be held in Bangalore towards the end of the mouth.

The Indian all-rounder was asked by BBC, how much he felt Stokes was worth, and replied that a couple of million.

"He's a quality hitter, fast bowler and fielder. He'll definitely get the big bucks. He brings a lot to the table," Yuvraj told BBC in further praise of the England all-rounder.

The 35-year-old Yuvraj, 35, who played against Stokes in the just ended ODIs and T20s admitted enjoyed playing against the rising star of international cricket. "I always see Ben and Virat having a go at each other. It's great for cricket to have passion.

"We always have banter with the English. My old battles were with Andrew Flintoff," Yuvraj recalled. 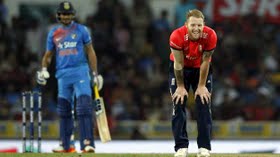 The IPL season this year will be held from April 5 to May 21. And, unlike previous years the England players will be available for a better part of the tournament as they won't be playing much Test cricket in May.

"If these guys come and play the IPL, their skills will improve. The more they play in different conditions, the better they will become," Yuvraj concluded.