WC 2015 SA vs IRE live scores: As the World Cup enters its third week, Ireland will take on South Africa at Canberra on Tuesday.

As the World Cup enters its third week, Ireland will take on South Africa at Canberra on Tuesday. Both teams will go into the game on a high, Ireland having defeated West Indies and Afghanistan in their opening two encounters rather impressively, and South Africa after putting up a brilliant show against a listless West Indies following the unexpected loss to India at Melbourne in their opening game. Without doubt, the Proteas would go into the game as favourites since they are a much superior side to Ireland. But, they would definitely not risk taking Ireland lightly, aware of their giant-killing reputation. Ireland, on the other hand, would be waiting to pounce in case the Proteas do slip.

Both South Africa's batting and bowling pose a big danger to Ireland's chances. If you take away Quinton de Kock, all their other batsmen have been among the runs. Hashim Amla, Faf du Plessis and Rilee Rossouw all got half-centuries against the West Indies and looked in good touch. But, it is the unbelievable form of South African skipper AB de Villiers that would be a major cause of worry for Ireland, as it will be for all opposing captains. The way de Villiers is batting at present, it seems he can do no wrong. Ireland have an earnest bowling attack, but it is definitely their weak link. And de Villiers gets into them, he could cause serious havoc again. 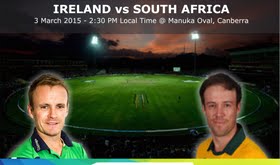 It was a blessing in disguise for South Africa that their middle and lower order got a chance to have a hit early in the tournament. Both David Miller and JP Duminy have a century each to their name, in the same match against Zimbabwe. And so, if their batting services are needed, they should not look rusty in any way. Of course, in the absence of the retired Jacques Kallis, South Africa's balance has been distributed as they are missing a genuine all-rounder in the team. Also, there is no one on the lines of Lance Klusener and Shaun Pollock in the side. But, South Africa will have to play around with what they have.

After putting up an impressive bowling effort against the West Indians in their previous game, South Africa would be keen to carry on their good work. The injury to Vernon Philander actually proved to be a blessing in disguise for South Africa as Kyle Abbott came in and blew the West Indies top order away with his pace. Imran Tahir too bowled superbly against the West Indians, and would be keen to continue his good work. Ireland aren't great players of spin, so they must be wary of the leggie. Per se, Dale Steyn and Morne Morkel haven't been at that threatening best. but the Canberra game gives them an opportunity to show improvements.

Unlike against West Indies and Afghanistan, Ireland would clearly have their task cut out against a much-stronger South African outfit. But, the giant-killers would take confidence from the fact that they have gotten the better of big sides before. In case, South Africa put up a dominating display, Ireland would look to hang in, and try to catch South Africa off-guard wherever they can. With Boyd Rankin shifting loyalties to England, their bowling has become extremely weak, but Ireland have the ability to make up for it to an extent with the bat. They have numerous match winners in the likes of Paul Stirling, William Porterfield, the O'Brien brothers and Gary Wilson among others. It is thus imperative for South Africa to remain on top of their game.