Can Australia recover from ‘super’ defeat?

Australia may have lost the T20 series against Pakistan, following the Super Over loss in the tied game, which pushed them below Ireland in the T20 rankings. Still, they have plenty to play for in the final T20 at Dubai on Monday.

Australia may have lost the T20 series against Pakistan, following the Super Over loss in the tied game, which pushed them below Ireland in the T20 rankings. Still, they have plenty to play for in the final T20 at Dubai on Monday. The game will be most significant considering that this will be their last T20 international fixture before the World T20 kicks off in Sri Lanka. As such, they would be keen to go into the premier T20 tournament on a winning note, and not following a whitewash by Pakistan, the former champions.

Even though they ended up losing the second T20, Australia would be pleased that they put up much better performance than the first game, when they were bundled out even before reaching 90. Keeping the Super Over aside, they matched Pakistan in all departments, and should carry that confidence into the last game of the series. In George Bailey, they have a captain, who has been leading from the front with the bat. He would want to do so on Monday as well, to inspire his team to a consolation win in the series. After the heartbreak in the last game, such a result would be a major fillip for the Aussies.

Despite being involved in the tie on Friday, there are still a couple areas where Australia need to improve significantly. With the ball, only left-arm seamer Mitchell Starc was economical, the rest couldn’t keep it tight, allowing Pakistan to get to a challenging total batting first. Pat Cummins and Daniel Christian went for quite a few, as did veteran left-arm spinner, 41-year-old Brad Hogg. Australia will need to tighten their game significantly in this department for, given the conditions, Pakistan have the batsmen who could take the bowling to the cleaners. 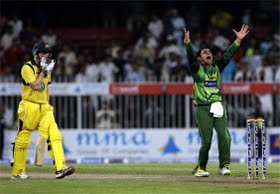 As for Australia’s batting, they need their senior players to convert starts into bigger score. Considering the manner in which David Warner and Shane Watson began their chase in the second T20, Australia should have won the game easily. At one stage, they were 79 for 1 in the 11th over, but still could not manage to get over the finishing line. The culprits were experienced players like Warner, Watson and Mike Hussey, who fell after getting starts, so Australia only have themselves to blame for the loss. Skipper Bailey tried his best, but couldn’t carry on till the very end.

Australia’s jittery batting against the spinners, Saeed Ajmal in particular, remains a major worry. On Friday as well, it was his spell of 2 for 20, which included the big scalps of Warner and Watson, that turned the game Pakistan’s way. It will be difficult for the Aussie batsman to conquer the off-spinner overnight, but they need to work a way out to keep him at bay while scoring heavily from the other end. If Ajmal keeps picking wickets, Australia’s task of winning becomes doubly difficult.

A real challenge then for Australia, but this is one team that loves challenges so Pakistan better not drop guard.