Yet another heavy defeat to Delhi, their fourth in a row. Their batsmen struggled for momentum and could only put 110 on the board, which was no challenge for table toppers Mumbai as they steamrolled Delhi bowlers with Kishan leading the way with a fine knock of 72*(47).

Put into bat by Pollard, Delhi got off to yet another poor start with the bat as Shikhar Dhawan was dismissed for a duck, his second on the trot. Prithvi Shaw, who was replacing Rahane, got out pulling in the 3rd over, even though he had gotten two boundaries earlier in the over. It was a similar story that followed - after the loss of early wickets, Iyer and Pant try to rebuild the innings leading to poor scoring rate. At the end of 7 overs, the score read 28-2 and Delhi were headed for yet another shabby finish with the bat. 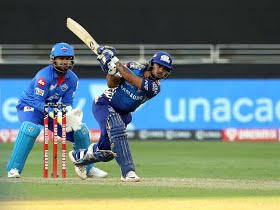 Jayant Yadav was bowling the 8th over, and Iyer smashed him for a massive six over long-on as Delhi tried to show some intent from thereon. That ploy didn’t work out as after a couple of quiet overs, Iyer was stumped brilliantly by de Kock off the bowling of Rahul Chahar. Bumrah then bowled the decisive 12th over where he picked up Stoinis and the struggling Pant to put his team well on top. Harshal Patel was Bumrah’s next victim. The onus then was on Hetmyer to hit some important runs but he picked the fielder in the 16th over as Delhi slid further into trouble. Ashwin, Dubey and Rabada hit some runs to make sure Delhi crossed 100, and finished with a paltry 110-9.

Chasing such a low score was never going to be a problem for the flying high Mumbai. Ashwin bowled some tight lines in the beginning as only 10 runs came from the first three overs. Kishan was done with his “seeing off the new ball” strategy, and attacked premier Delhi pacers Nortje and Rabada as five boundaries came in the space of three overs. Debutant Pravin Dubey bowled the 8th over and had a couple of close calls in the two initial deliveries that he bowled, but Kishan got the measure of him soon after.

Nortje finally gave Delhi a breakthrough as de Kock played on. Still there was no panic in the Mumbai camp as the equation was a very gettable 43 from 58 at that point. With Suryakumar Yadav giving the strike back to Kishan, the left handed dasher from Jharkhand showed his batting prowess against quality bowlers like Rabada and Nortje. He got to his fifty and then went on to hit the winning runs with a stylish flick over deep square leg to guarantee Mumbai a top two finish. Scorecard I Points Table