Toss: Dhoni wins the toss and India will bowlfirst 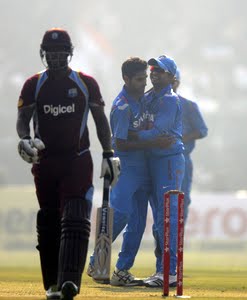 MS Dhoni: "Whatever games we have played here, even if it looks as the flattest wicket, there is still something for the bowlers here. I remember the 8.30 starts in Guwahati. This is not as early a start. The sun is quite low, and the batsmen may have to adjust." India are unchanged.

Dwayne Bravo: "We would have bowled as well. We back ourselves chasing against the Indian bowling line-up. It is a big opportunity for us, to win a series against a high-ranked opposition away from home. Personally it will be big for me." West Indies are unchanged too.

India have lost only three out of 11 ODIs played in Kanpur. They lost to West Indies in 1994.

The toss will be important, says Ravi Shastri, given the early start. Supersoppers out in the morning to mop up the overnight dew. Shastri says the surface was damp and cold some time ago but already it is drying up and changing colour under a strong sun. The balls will still do something for the initial few overs, though.