South Africa may have got some points on board following their comprehensive victory over Afghanistan, but they will definitely start as underdogs when the face the sublime New Zealand in match number 25 of World Cup 2019 at Brimingham.

A South Africa-New Zealand World Cup clash now instantly brings to mind the 2015 semi-final where Grant Elliott left South Africa heart-broken by slamming Dale Steyn for a six in the dying moments of the game. Of course, four years have passed since, but with the kind of record the Proteas possess under pressure, who knows it might still be playing at the back of their minds. 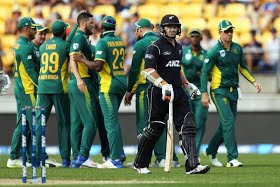 Coming back to the current contest, South Africa finally managed a win after three big defeats. However, it was against Aghanistan. Their bowling has done reasonably well with Imran Tahir among the wickets. Kagiso Rabada has been the team's leading bowler in recent times, and he hasn't disappointed. Lungi Ngidi being declared fit is definitely good news for the Proteas as is the return to form of the openers in the previous game.

New Zealand have been excellent so far in the event. Having registered three comprehensive wins, they would have been eager to take on India. Unfortunately, a mouth-watering prospect was nipped in the bud as rain played spoilsport. They have some players in excellent form, none better that their skipper Kane Williamson, who has been among the runs in both the last matches. Martin Guptill, Colin Munro and Ross Taylor also form an impressive batting trio.

Conditions have definitely suited the Kiwis in this World Cup, which is why their pace bowlers, in particular, have troubled opponents. The weather has been predicted to be overcast at the start so New Zealand might be keen to bowl first. In Colin de Grandhomme and Mitchell Santner, New Zealand have two utility all-rounders, which again gives them an advantage over South Africa.