World T20 IND vs WI: MS Dhoni's India will take on Darren Sammy's West Indies in the second semi-final of the 2016 World T20 at the Wankhede Stadium in Mumbai on Thursday. India will go into the knockout match on a high

MS Dhoni's India will take on Darren Sammy's West Indies in the second semi-final of the 2016 World T20 at the Wankhede Stadium in Mumbai on Thursday. India will go into the knockout match on a high, having shut out the Australians in a virtual quarter-final, just as they did in the 2011 World Cup. But, the victory wasn't a highly convincing one, which reiterates they still have some work to do if they want to lift the trophy at home. West Indies, on the other hand, would go into the semis under rather bizarre circumstances. After having beaten England, South Africa and Sri Lanka comprehensively, they went down to Afghanistan in the last league match. But, that is how West Indies are, unpredictable yet dangerous 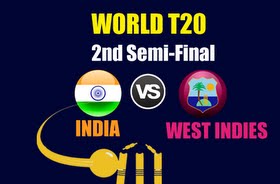 .
At home, and on paper, India will start as favourites to clinch the game. But, the task would be rather difficult, for India haven't been as good as they are on paper. If at all they have managed to reach thus far, it has primarily been because of the stupendous efforts of Virat Kohli, who singlehandedly took them to wins over Pakistan and Australia under adverse circumstances. In both the innings, India found themselves at the crossroads, and had it not been for Kohli, they could very well have faltered midway. The knock against the Aussies was particularly scintillating, for India had fallen way behind in the chase, but Kohli brought them back in a matter of a few overs.
India have been dealt with a big blow in the run up to the semis for Yuvraj Singh has been ruled out due to the ankle injury he picked up against Australia. Yuvraj's absence means India will have to tinker with the batting order, as either Ajinkya Rahane or Manish Pandey might come in. But, they have bigger woes in the batting department. The openers Rohit Sharma and Shikhar Dhawan have been terrible, failing to provide the desired starts to the hosts. It could be a blessing in disguise if they are separated at the top by Rahane. Suresh Raina is another man who hasn't lived up to his reputation. He is batting at the high number four position, and India cannot afford constant failures from him.
India's bowlers have done well, led by the experience of Ashish Nehra at the top, and the young but mature Jasprit Bumrah as his deputy. Ravichandran Ashwin and Ravindra Jadeja also have been among the wickets in the tournament. But, as observed against Australia and, to an extent, Bangladesh before that, India have to improve their bowling effort as well. Bumrah's lack of international experience has been exposed with him being taken to the cleaners early in the innings. Ashwin too has been attacked, and successfully so. In fact, in the Power Play against Australia, almost all the bowlers were thrashed, although it must be said that they recovered well thereafter. There's scope for improvement for sure.
In the absence of Chris Gayle, West Indies went down to Afghanistan, a reiteration of how significant Gayle is to the team's fortunes. In fact, many critics are predicting that the battle between Gayle and the Indian bowlers, Ashwin in particular, could be the defining factor of the match. Andre Fletcher may have been ruled out of the match, but West Indies still possess decent batting talent with the likes of Johnson Charles and Marlon Samuels around. It is in the all-round department that West Indies hold an edge over the Indians. The likes of Dwayne Bravo and Andre Russell are capable of winning them games with both bat and ball. There is absolutely no reason for India to take West Indies lightly.
-- By A Cricket Analyst