South Africa held onto a 9-run victory over New Zealand in a high scoring contest at the Colts Cricket Club Ground in Colombo.

South Africa held onto a 9-run victory over New Zealand in a high scoring contest at the Colts Cricket Club Ground in Colombo. 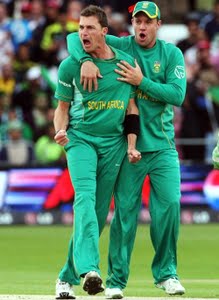 New Zealand in reply put SA under pressure courtesy of a blistering innings of 75 (from 42 balls with 2 fours and 7 sixes) from Skipper Ross Taylor. Rob Nicol, batting in the middle order put up a strong partnership with Taylor in his knock of 37 (from 36 balls).

South Africa went onto win the match once Lonwabo Tsotsobe got the prized wicket of Ross Taylor in the 16th over with the Kiwis at 143 for 4. Dale Steyn was the hero for the Proteas taking 4 for 25 in 4 overs.