Royal Challengers Bangalore defeated defending champions Mumbai Indians by 7 wickets in a low-scoring match at Dubai. This is now a second defeat in a row for Mumbai Indians once again with their strong batting line-up faltering. RCB were left to chase a low target of 116 which was wrapped up with 15 balls to spare.

Virat Kohli’s decision to bowl first proved to be spot on as Mumbai Indians struggled to reach 115 losing as many as 9 wickets. Young leg-spinner Yuzvendra Chaval bowled brilliantly accounting for the big wickets of Skipper Rohit Sharma and Kieron Pollard which left Mumbai Indians to 70 for 4 in 11.2 overs. 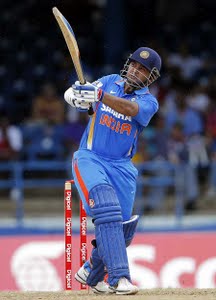 AT Rayudu was the top scorer of the innings with a slow 35 from 37 balls. The last hope for Mumbai Indians – Corey J Anderson batted for 19 balls to score just 18. RCB bowlers finished the innings pretty well giving nothing away.

Yuzvendra Chaval was the pick of the bowlers with 2 for 17 in 4 overs. Mitchell Starc made an important contribution with 2 for 21 in 4 overs while Ashok Dinda mixed his pace well to take 1 for 14 in 4 overs.

RCB chasing an easy target were pegged back with three early wickets. Skipper Virat Kohli and Yuvraj Singh dismissed in the space of three balls by Zaheer Khan. Mumbai Indians couldn’t push on for a victory after that as a solid partnership from opener Parthiv Patel (57* from 45 balls with 7 fours) and AB de Villiers (45* from 48 balls with 3 fours and a six) sealed the run chase for RCB.

Parthiv Patel was named as the Man of the Match for his crucial half century.

Toss and Teams: RCB have won the toss and asked Mumbai Indians to bat first in Match 5 at the Dubai International Stadium. RCB remain unchanged from their previous outing which means there is no Chris Gayle yet because of an injury.