England went into the final ODI of the series at Manchester on a high, having tasted comprehensive wins in the previous two matches. As such, they held the momentum going into Sunday's game.

England went into the final ODI of the series at Manchester on a high, having tasted comprehensive wins in the previous two matches. As such, they held the momentum going into Sunday's game. However, just like in the final Ashes Test, they couldn't put out their best game. There was a major difference in the two situations though. While in the Tests, the final match was a dead rubber, with the hosts having already reclaimed the Ashes, here the series was at stake. But, England somehow couldn't bring out their best game and, in the end, put up a rather forgettable performance.

While England's entire batting display at Manchester was shambolic, the loss of Eoin Morgan to injury was particularly significant. All through the series, he was the man who was keeping the fight alive for the team even after they found themselves in desperate positions. But, that wasn't to be the case on Sunday. His decision to duck under a bouncer proved catastrophic for the team. England were already in trouble by the time he had come out to bat. But, had he stuck around things could have been different, as Morgan had proved just a game earlier when he played the pivotal role in England chasing 300. 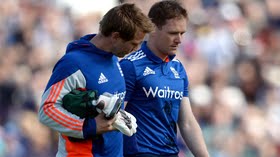 The entire batting performance from the English side will come under the scanner, particularly for the manner in which they faltered in a key game. Jason Ray had done well in the previous games, but failed on the day when it mattered the most. The same can be said of James Taylor, who registered his first failure of the series, and later had to captain the side in the absence of Morgan, with not much left for England to defend. Alex Hales' miserable series continued and, it may be a while before we seem him in an England ODI again.

Once the top four were dismissed cheaply, England were always going to struggle. But, teams have fought back from such situations. This was a great opportunity for Ben Stokes to prove his capability. He did reasonably well, looking in good nick even as the others struggled. However, he did not last long enough to make a significant difference. Ideally, he should have carried on, and led the fight back towards the end of the innings. But, that wasn't to be the case. To be fair to him, there was no resistance from the lower order as well. Jonny Bairstow and David Willey failed to utilise the opportunity to make a difference.

To be fair to the England bowlers, there wasn't much they could do once the Aussies had trampled their batting. Still Mark Wood and David Willey gave some brief hope to them when they claimed an early wicket each. But, the deciding factor in Australia's favour was that they were under no pressure of the run rate. All they had to do was bat normally. And, once the visitors did so, England's bowlers were rendered ineffective. Of course, England would have been hoping for an inspired effort from their bowlers. But, under the circumstances, and considering Australia's dominance, it was too much to ask for.