After dismantling the West Indians inside four days at Galle, Sri Lanka would aim to come up with a similar effort at the P. Sara Oval in Colombo, in the second Test beginning on Thursday

After dismantling the West Indians inside four days at Galle, Sri Lanka would aim to come up with a similar effort at the P. Sara Oval in Colombo, in the second Test beginning on Thursday, to clinch the series 2-0. Looking at the state of the two teams, and strength of Sri Lanka under prevalent conditions, the hosts are very much favourites to take the series with ease. West Indies have done well in Sri Lanka in the past, but that was when Brian Lara tamed Muttiah Muralitharan. The present squad is devoid of such a genuins, neither do they have the likes of Shivnarine Chanderpaul or Ramnaresh Sarwan, who can bat for long hours.

If West Indies are seeking positives, there is actually only one, and they have nothing at all to do with it. The P. Sara Oval hasn't been a happy hunting ground for the hosts. They have lost a few matches at the venue, including the last Test played here against India. But, do West Indies have the players to put the Lankans under pressure, and drive home a point? No seems the highly likely answer. In spite of their not so pleasant record at the venue in recent years, Sri Lanka would be disappointed if they do not put it across the Windies in the second Test. They have pinned down the visitors, and would be keep them there. 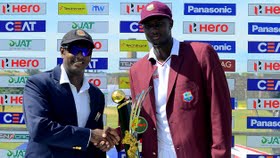 West Indies struggled at Galle because their batsmen were completely clueless against the left-arm spin of Rangana Herath. Not a lot is expected to change in a matter of a few days. But, West Indies must look to put up a better effort than the shabby one they came up with at Galle. For the same to happen, the experienced batsmen need to stand up and be counted. Darren Bravo's comparisons with Lara have long stopped for he hasn't been delivering. At Galle as well, he got two starts, but did not have a lot to show for it. Marlon Samuels continues to be exasperating. It wouldn't help his confidence that his bowling action has been termed suspect again.

West Indies' batting as a whole needs to stand up and deliver at Colombo. The openers, for a start, need to perform. Both Kraigg Braithwaite and Shai Hope failed in both knocks at Galle, making things tough for the middle order. Jermaine Blackwood continued the impressive start to his Test career with another sizzling knock in his second innings, but the lack of support from the lower order meant West Indies could not avoid an innings defeat. Denesh Ramdin would not have survived as an international wicket-keeper batsman for so long had he been playing for one of the top Test teams, and that's saying a lot about his ability.

Sri Lanka, in contrast, completed a near-perfect victory in the first Test. Opener Dimuth Karunaratne and Dinesh Chandimal got massive hundreds to help the team post a big total. Herath then took over, and singlehandedly bowled the hosts to a memorable victory. He would be the key again at Colombo. There a still a couple of issues Sri Lanka need to address. They need to guard against complacency, a hint of which was seen as they collapsed in the first innings after looking set for 600 plus. Their batting against Devendra Bishoo also was disappointing to an extent. Overall though, Sri Lanka should be pleased with where they stand.