This was their second triumph in three years, having won the trophy after beating Chennai Super Kings at Kolkata in 2013

This was their second triumph in three years, having won the trophy after beating Chennai Super Kings at Kolkata in 2013. This year too the venue, the opponents as well as the results were the same. But, what was most striking was the manner in which they fought back from adversity. After the first couple of weeks, they were languishing at the bottom of the points table, having tasted one defeat after the other. No one gave them much of a chance after that. But, they returned, and how! 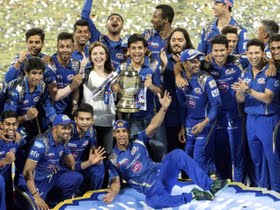 In contrast, Chennai Super Kings again tasted disappointment in the final. No doubt, they are the most consistent, and most successful franchise in the short history of the T20 league. The fact that they have made it to six out of the eight finals so far is incredible. At the same time, the record of losing four out of six finals is not so impressive. The fact that they possess such a poor record in IPL finals definitely points to a weakness in their game. Chennai have constantly been a danger in the league stages. This year as well, they finished on top of the points table. But, the end result wasn't in their favour.

Looking back at their wonderful comeback, Mumbai would be grateful that a number of their players put their hands up and delivered. Kieron Pollard was their talisman, making the difference on numerous occasions with his splendid big hitting skills. And, who can forget that last over against Kolkata. Pollard shone in the final as well. At the top, Lendl Simmons was consistently getting half-centuries. In the final as well, he came up with a critical knock. Skipper Rohit Sharma had a mixed season, but his failures would matter for little as he played a match-winning knock in the final. Ambati Rayudu too stood up to be counted.

Mumbai's success was built on successful contributions in the bowling department as well. Lasith Malinga led the attack from the front, after a poor start, proving that he still has some fire left. He found perfect support in Mitchell McClenaghan, something that was missing early in the event. And, Harbhajan Singh was potent as ever. Their bowling outfit was among the most impressive of all teams.

With Chennai, the case was the reverse, specially when it came to facing Mumbai. Their weaknesses were exposed. Their batting failed miserably both times against Rohit Sharma's men. Suresh Raina's poor form was one of the chief reasons for Chennai's failure in crunch matches. Lack of runs from Dwayne Smith, and the middle order made matters worse. They were significantly handicapped once Brendon McCullum left. Even in the bowling, while Dwayne Bravo and Ashish Nehra shone, they were second best when it came to facing Mumbai.