England bowled as many as 94 overs on the opening day’s play at the Sheik Zayed Stadium in Abu Dhabi and bounced back in the Jazz Cup Series reducing Pakistan to 256 for 7! Pakistan could have been in a lot more trouble but for a crucial 100-run stand between Skipper Misbah-ul-Haq (83* from 168 balls with 5 fours and 4 sixes) and Asad Shafiq who scored 58. England had a fabulous last session breaking the fifth wicket stand and then picking up two more wickets. It was quite surprising to see Pakistan struggle at 256 for 7 on a pitch that was predicted to be a placid one. Surely Misbah-ul-Haq would have hoped for a total of around 400 atleast after he had won the toss and elected to bat first. But his plans were foiled by Stuart Broad and Graeme Swann who picked up three wickets each.

It was a mixed day for England on the field with atleast a couple of catches being put down, one was that of Misbah-ul-Haq when he was batting on just 30! In the afternoon session, Stuart Broad provided an early breakthrough when Younis Khan (24) played all around a length delivery to get bowled while trying to flick right across the line. Broad in no time followed it up with the wicket of no.3 Azhar Ali (24) by going right through his gate to hit timber. Pakistan were reduced to 103 for 4 because of those twin blows. 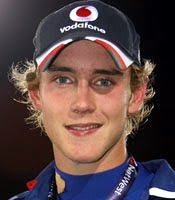 By Tea, Misbah-ul-Haq survived because of a drop catch from Anderson off Panesar. The Pakistani Skipper with Asad Shafiq saw his team’s possible revival at 177 for 4 in 65 overs. After sometime in the final session, a well set Asad Shafiq (58 from 126 balls with 7 fours and a six) threw his wicket away attempting a wild heave against Graeme Swann to get lbw. With the second new ball, Stuart Broad struck again to have Wicket Keeper Adnan Akmal dismissed with a pacy full length indipper that had him lbw. Graeme Swann rounded off England’s day by getting his off break to land on middle and turn away sharply to hit the off stump of Abdur Rehman (0) just at the close of play. Misbah-ul-Haq watched at the other end as his team slipped to 256 for 7.

Lunch Update : Pakistan are on the backfoot at 73 for 2 in 31 overs at Lunch on the opening day’s play of the Second Test at Abu Dhabi today. Spinners Graeme Swann and Monty Panesar have taken a wicket each for England.

At Lunch, Pakistan have got Azhar Ali on 13* (from 46 balls) batting along with former Captain Younis Khan who is on 6* (from 17 balls). After a bright start of 51 for 0, Pakistan lost their first wicket in Taufeeq Umar (16) who got bowled by an arm ball from Graeme Swann after the left hander dangerously offered no shot to have his off stump rattled in the 19th over. Monty Panesar complemented Swann by removing the in-form Mohammad Hafeez (31 from 77 balls with 4 fours) with an arm ball that skidded through the right-hander’s gate to hit timber.

Toss and Teams : Pakistan won the toss and elected to bat first in the Second Jazz Cup Test at the Sheikh Zayed Stadium in Abu Dhabi. England who are in a must-win situation if they want to clinch the Test Series have made one change with left-arm spinner Monty Panesar coming in for the injured Chris Tremlett. So England go into this match with two spinners and two quicks.

Pakistan surprisingly have made one change by bringing in left arm pacer Junaid Khan in the place of Aijaz Cheema.