Apart from being a mesmerising venue, Eden Gardens has also provided some memorable wins for India over the years, none more remarkable than the turnaround against the Aussies in 2001.

Apart from being a mesmerising venue, Eden Gardens has also provided some memorable wins for India over the years, none more remarkable than the turnaround against the Aussies in 2001. Sadly, the build up to the third Test has been again marred by M S Dhoni and his vagaries over spinning pitches. To make matters pleasant we take you to back in history, to the last time when these two sides met at the magnificent venue that will host the third Test of the current series in a few days’ time, which was way back in 1993. 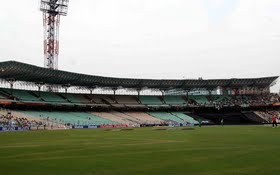 It was the first Test of the three-match series. India won the toss and, as expected, chose to bat first. Mohammad Azharuddin was the captain back then, and those were the days when Navjot Singh Sidhu used to be an opener, and Manoj Prabhakar his partner. India got off to a poor start in the game, losing Sidhu for a painstaking 13. Vinod Kambli also fell early, contributing only 16 and Prabhakar undid all his hard work by departing after gathering 46 off 120 balls.

At 93 for 3, India were in trouble, but they found a hero in none other than skipper Azhar. Batting at his undisputedly favourite venue, Azhar charmed the crowds on his way to a thumping 182. The Indian skipper needed only 197 balls to score the runs, and the knock was punctuated with 12 fours and one six. For a majority of his career, Azhar’s excellent knocks had been overshadowed by Sachin Tendulkar’s brilliance, but at the Eden Gardens that day, even Tendulkar had to play second fiddle. To his credit, the man who was to succeed Azhar as skipper was quite content playing the supporting role, his 50 playing its part helping India to recover to 371.

After Azhar’s brilliance, the spin trio of Anil Kumble, Venkatapathy Raju and Rajesh Chauhan dismantled England. The visitors had no answer to India’s spin sensations back then. All three picked up three wickets each as England crumbed to 163 in response, despite batting for 100 overs. That Mike Gatting’s 33 was the highest score of the innings told the sorry tale of England. Ian Salisbury made 28 and Chris Lewis 21, but it wasn’t enough to rescue England from embarrassment. For the record, Kumble picked up Robin Smith, Graeme Hick and Neil Fairbrother, Raju dismissed Graham Gooch, Lewis and Paul Jarvis while Chauhan sent back Gatting Salisbury and Paul Taylor. The other wicket, that of Alec Stewart, went to Prabhakar.

England batted better in the second innings, notching up 286 courtesy Gatting’s 81 and 49 from Stewart. However, it wasn’t enough to get India out of trouble. The Indian spinners were in action again; Kumble and Raju picking up three and Chauhan two. Chasing a small target of 82, India lost their openers but Tendulkar and Kambli took them home.

Trivia: Tendulkar is the only active Test cricketer from that game played nearly 20 years back!