20 deliveries are more than enough to turn around a game in T20 and the second game of IPL proved exactly that. Kolkata Knight Riders all-rounder Andre Russell

20 deliveries are more than enough to turn around a game in T20 and the second game of IPL proved exactly that. Kolkata all-rounder Andre Russell smashed 49 in 19 balls with four sixes and as many fours as Kolkata chased down 182 out of nowhere.

KKR needed 53 off the last three overs and yet got home with two balls to spare as Hyderabad were stunned into silence at the Eden Gardens. 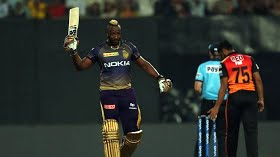 Russell spoilt what seemed like a perfect comeback for David Warner, who blasted 85 from 53 balls with nine fours and three sixes. It was Russell who ended Warner's blitz and then also dismissed the dangerous Yusuf Pathan cheaply.

Kolkata made an interesting choice, deciding to open with Nitish Rana, who made his mark with 68 from 47 balls. However, failures of Chris Lynn and skipper Dinesh Karthik put the side in trouble in the chase before Russell turned things around completely with some help from Shubman Gill towards the end, who finished off the chase with two sixes off Shakib Al Hasan.