All eyes on Yuvraj Singh as T20s begin

Following the hard fought Test in Bangalore, India and New Zealand now head into the T20 format, with two games to play before both sides head to Sri Lanka for the World T20. In short, the next two matches will present these teams with their last chance of working out which XI works for them prior to the commencement of the format’s premier event.

Following the hard fought Test in Bangalore, India and New Zealand now head into the T20 format, with two games to play before both sides head to Sri Lanka for the World T20. In short, the next two matches will present these teams with their last chance of working out which XI works for them prior to the commencement of the format’s premier event.

As far India are concerned, a lot of eyes will be on Yuvraj Singh, who will be returning to cricket following successful treatment of rare germ cell cancer. The two matches against New Zealand will give the Indian think tank a fair idea as to how ready the left-hander is to take on the world again. As mentioned in an earlier piece, it is important not to put undue pressure on comeback man. The crowds will be charged up for sure, hoping the left-hander makes a roaring return. In all fairness though, he needs to be given a longer run before one can assess if his illness has had any significant impact on his game. 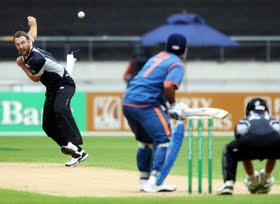 The match that will be held at Visakhapatnam will be a noteworthy one for India on a couple of other counts as well. As we saw in the Tests, both the openers Gautam Gambhir and Virender Sehwag did not score too many runs. While Gambhir was completely out of sorts, Sehwag kept getting out after getting starts. From an Indian point of view, it is very important that this scenario changes else they must start hunting for younger legs, at least for this faster format of the game. Both Gambhir and Sehwag are match-winners no doubt, but it wouldn’t count for much unless they translate their potential into runs. The T20s will present them with another chance to do the same.

Two other Indian players from whom the upcoming games will be vital are Harbhajan Singh and Rohit Sharma. One will be making his comeback, and will have a point to prove while another would look to make amends for the disappointments in Sri Lanka. There is no guarantee that either would feature in the starting XI in the two T20s coming up, but if they do get a chance, they must not let it go waste.

Shifting attention to New Zealand, they would be pleased to have veteran Daniel Vettori around. Even if the left-arm spinner doesn’t pick up many wickets, he can be expected to keep the runs down considering his vast experience. Kiwis’ performance in the Bangalore Test would have also given them a renewed sense of confidence. The fact though still remains that they are a struggling side, no matter what format we look at. The Kiwis were beaten comprehensively in the T20s both in South Africa and West Indies. They do have a couple of players who can make a difference. All-rounder Jacob Oram is coming off a successful SLPL season while James Franklin has experience of playing here in the IPL before

There are no favourites in a T20 game per se, but India would like to win this one for Yuvraj.